This product is available in: CO, DC, NY Unfortunately, we can't ship to PO Boxes and APO addresses.

Size750mL Proof80 (40% ABV)
This Leopold Bros. whiskey is proudly made with real fruit, and no artificial preservatives.
Notify me when this product is back in stock.

This product is available in: CO, DC, NY Unfortunately, we can't ship to PO Boxes and APO addresses. 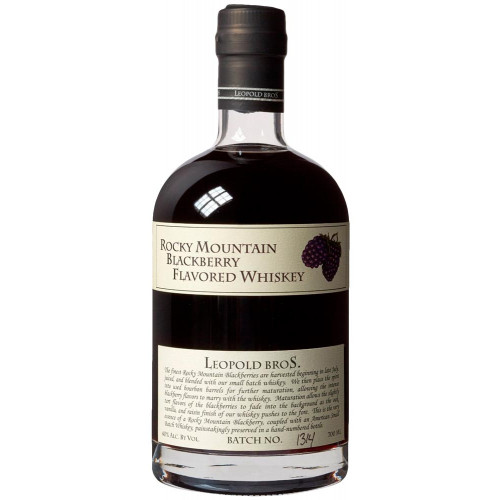 Situated in an industrial complex on the outskirts of Denver, Leopold Bros. Distillery is the brainchild of Todd Leopold. After receiving his diploma in Malting and Brewing from the Siebel Institute in Chicago, Todd moved to Germany and began working at the Doemens Academy of Brewers and Maltsters in Munich. Then, he apprenticed at four different breweries and distilleries in Germany, before moving to Kentucky to study distilling. In 2008, Todd, along with his brother Scott, moved back to his parents' home in Littleton, Colorado and opened the doors to Leopold Bros. Distillery.

The finest blackberries from the Rocky Mountain region are harvested over the summer, juiced, and blended with their small batch whiskey. The result is a rich spirit with notes of vanilla, raisin, and oak imparted by the charred American barrels. This whiskey is naturally colored by the barrel and blackberry juice, and bottled by hand to maintain the integrity of the sweet blackberries and soft finish.

This Leopold Bros. whiskey is proudly made with real fruit, and no artificial preservatives. As such, the fruit will naturally oxidize over time. Enjoy within 60 days of opening if left open at room temperature. To preserve your whiskey longer, place it in a refrigerator for up to 120 days.

Young forest berries and citrus on the nose. The palate is full of sweet blackberries, caramel and vanilla followed by a lingering sweet fruit finish with caramel, dried fruits, and vanilla.