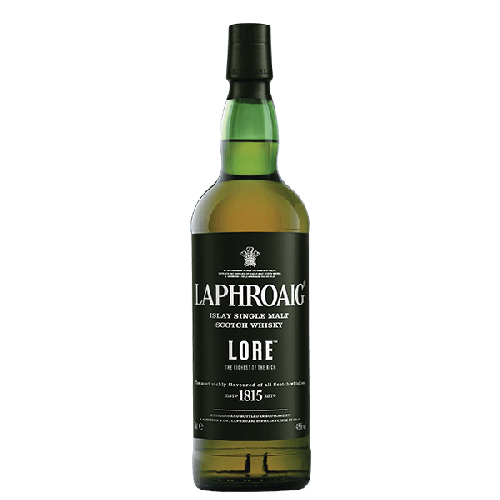 Laphroaig Single Malt Whisky is one of the most flavorful and intense whiskies made anywhere in the world. During Prohibition, it was one of the few whiskies still legally imported into the United States, as it was considered a medicinal spirit. Laphroaig Single Malt is made from the finest Scottish barley, which is then malted at the distillery and smoked over a peat flame. Unlike other distilleries which source peat from the Scottish mainland, the peat used to smoke Laphroaig barley is made from the heather, mosses and lichens of Islay and adds a distinct iodine-like flavor to the whisky. After the barley has been malted and peated, it is fermented before being twice-distilled through Laphroaig's copper-pot stills. The unique stills have an usually flat base and flat surfaces, which contributes to the overall intensity of the whisky.

“From the founding of Laphroaig, these custodians have each made their own mark, whether it was drying the malting barley at lower temperatures than most, using two sizes of spirit still, pioneering the use of ex-bourbon barrels, or reintroducing the quarter cask to Scotch whisky-making,” says Campbell. “Each of these decisions has made Laphroaig the unique, premium whisky it is today. We make the whisky we make because of what has been passed on down to us.”

Laphroaig Lore Islay Single Malt Scotch Whisky is aged in a number of casks, combining the best of first-fill bourbon barrels, quarter casks and Oloroso Sherry hogsheads. As a result, the whisky has a rich, smoky aroma with notes of ocean spray and ash. The palate, which is filled with bitter chocolate, vanilla, salted caramel and roasted chestnuts, leads beautifully to a finish complete with malt grain, chocolate chip cookies, tropical fruit and, of course, lots of peat.

Rich, smoky aroma with notes of ocean spray and ash. The palate, which is filled with bitter chocolate, vanilla, salted caramel and roasted chestnuts, leads beautifully to a finish complete with malt grain, chocolate chip cookies, tropical fruit and, of course, lots of peat.