Learn more
Size750mL Proof108.4 (54.2% ABV) - May vary *Please note that the ABV of this bottle may vary
Beginning with Glen Scotia classic single malt, it's aged in first-fill ex-bourbon casks and finished in deep charred oak. Gold at the 2020 San Francisco World Spirits Competition.
Notify me when this product is back in stock.

This product is available in: MI, RI Unfortunately, we can't ship to PO Boxes and APO addresses. 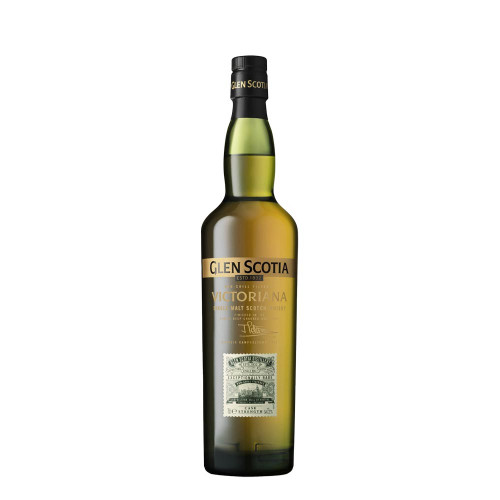 Glen Scotia’s line-up showcases their versatility, as they produced a range of peated and non-peated whiskies, two styles characteristic of Campbelltown, once known as the “whisky making capitol”. Their malt is sourced from eastern Scotland, and crafted in open-topped, cast iron mash tuns, and their whiskies are processed with a variation in fermentation time yielding either nuttier, or fruitier malts. Their small-batch distillation process still maintains much of the original equipment designs dating back to the 1830s.

Released in 2015, Glen Scotia Victoriana begins with their classic single malt, aged in first-fill ex-bourbon casks. Inspired by Victorian times, Glen Scotia master distiller handpicked the casks from their reserve cellar based on their rare characteristics and exceptional maturity for this cask strength single malt. Bottled in the traditional way at 108.4 proof, this exquisite smooth single malt was finished in deep charred oak. Boasting a full-bodied spicy and fruit nose that develops into a mildly smoky palate, the finishing process adds extra vanilla flavors and a deeper, richer color.

A dark and elegant nose with spicy oak and caramelised fruit aromas. The palate is mildly smoky and sweet with blackcurrant fruity flavors. The finish is clean and initially sweet.