Size750mL Proof97.2 (48.6% ABV)
Aged for over a quarter of a century, this whisky earned a score of 95 points from Whisky Advocate.
Notify me when this product is back in stock.

Notice:  *Product images of this bottle are symbolic. Should you have any questions about this product please let us know. The customer support will be happy to assist your interest in this or any other product. 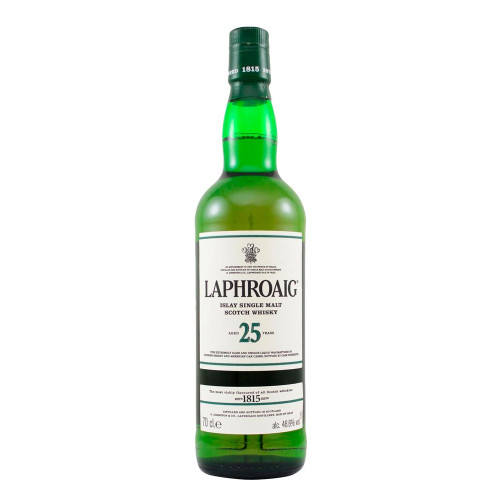 Laphroaig Single Malt Whisky is one of the most flavorful and intense whiskies made anywhere in the world. During Prohibition, it was one of the few whiskies still legally imported into the United States, as it was considered a medicinal spirit. Laphroaig Single Malt is made from the finest Scottish barley, which is then malted at the distillery and smoked over a peat flame. Unlike other distilleries which source peat from the Scottish mainland, the peat used to smoke Laphroaig barley is made from the heather, mosses and lichens of Islay and adds a distinct iodine-like flavor to the whisky. After the barley has been malted and peated, it is fermented before being twice-distilled through Laphroaig's copper-pot stills. The unique stills have an usually flat base and flat surfaces, which contributes to the overall intensity of the whisky.

Laphroaig 25 Year Old Single Malt Whisky was awarded the Gold Medal at the International Wine and Spirits Competition, where it was named "Best in Class." In addition, it earned a score of 95 points from Whisky Advocate, which said that the whisky "brilliantly fuses two different styles of whisky into a single, remarkable experience."

Hints of sweet fruits, cherries and sherry in the aroma. Notes of fruit carry forward to the palate, and are complemented by salty tang, baking and pepper spices and a subtle peaty undertone. The finish is intense yet gentle, with notes of smoke accented by a touch of sweet, creamy vanilla.