Learn more
Size750mL Proof86 (43% ABV) *Please note that the ABV of this bottle may vary
This special bicentennial bottling recreates one of Laphroaig’s most popular expressions of all-time.
Notify me when this product is back in stock. 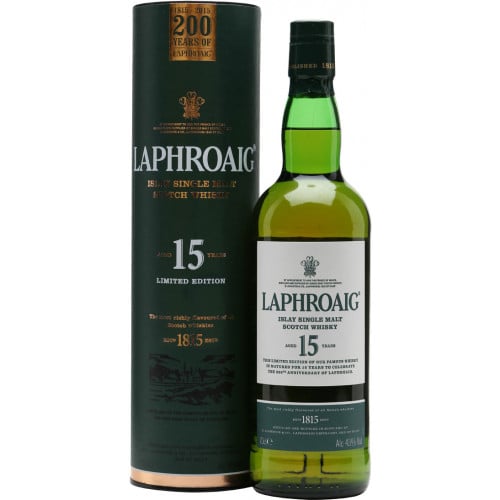 Situated on the southern coast of Islay, Laphroaig (pronounced La-froyg) Distillery was founded nearly two centuries ago by Donald and Alexander Johnston. The distillery derives its name from the ancient Gaelic word "lag"(meaning hollow) and the ancient Norse word "vik" (meaning bay), which refers to its location on the shores of Loch Laphroaig.

Laphroaig Single Malt Whisky is one of the most flavorful and intense whiskies made anywhere in the world. During Prohibition, it was one of the few whiskies still legally imported into the United States, as it was considered a medicinal spirit. Laphroaig Single Malt is made from the finest Scottish barley, which is then malted at the distillery and smoked over a peat flame. Unlike other distilleries which source peat from the Scottish mainland, the peat used to smoke Laphroaig barley is made of from the heather, mosses and lichens of Islay and adds a distinct iodine-like flavor to the whisky.

Originally launched in the 1980s, Laphroaig 15 Year Old Single Malt Scotch Whisky quickly became a fan favorite, with popularity culminating in 2000 when it was chosen by the Prince of Wales for the “Erskine Charity Bottling”. While the 15 year old expression was eventually replaced by Laphroaig’s now-standard 18 year old, in honor of the distillery’s bicentennial in 2015, Laphroaig has re released a special 200th Anniversary Edition of the Laphroaig 15 Year Old Single Malt Scotch Whisky.

Crafted in the exact same fashion as it was 30 years ago, Laphroaig 15 Year Old Single Malt Scotch Whisky has an initial aroma of mint and grapefruit, as well as saltwater, peat smoke and apple orchards. On the palate, the whisky is dry and peppery, with touches of leather and tobacco leading to a mellow finish that’s underpinned by subtle notes of peat, almonds and dates.

Laphroaig 15 Year Old Single Malt Scotch Whisky was pre-released to the distillery’s 650,000 “Friends of Laphroaig” earlier this year, but sold out within hours. Pick up a bottle on Caskers today!

Initial aroma of mint and grapefruit, as well as saltwater, peat smoke and apple orchards. On the palate, the whisky is dry and peppery, with touches of leather and tobacco leading to a mellow finish that’s underpinned by subtle notes of peat, almonds and dates.