Size750mL Proof96 (48% ABV)
From one of the most longstanding influential Whisky makers, The GlenDronach Parliament 21YO won a Double Gold Medal at the San Francisco World Spirits Competition. 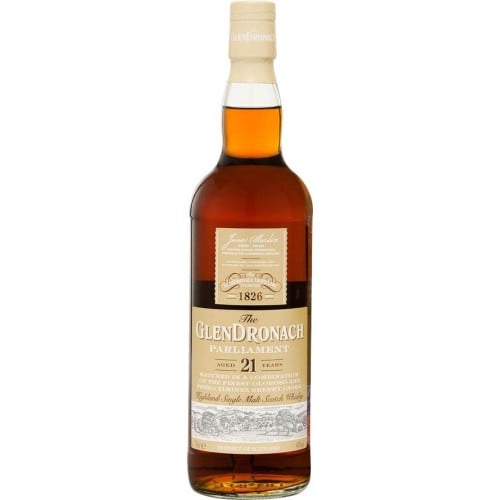 GlenDronach’s Parliament release is aged for at least 21 years in a combination of Oloroso and Pedro Ximenez (PX) sherry casks. ‘Parliament’ is a term to describe a particular group of birds. This rich expression has been named ‘Parliament’ after the colony, or ‘parliament’, of rooks that have been nesting in the trees that overlook the GlenDronach distillery for almost 200 years. Rooks are a member of the crow family, with silky blue black feathers and social temperaments. This Parliament release continues a legacy of traditional fruit-laden whiskies. With “Resolute flavours of fine Oloroso sherry and bitter chocolate…” the single malt won a Double Gold Medal at the 2017 San Francisco World Spirits Competition. Bottled at 48% ABV.

Pick up a bottle of this award-winning single malt today!

On the nose is a delicate mix of ripe autumnal fruits - notably blackberries and red plums. Rich Oloroso sherry and candied orange segments. Spiced oatmeal biscuits and toasted oak fragrances bring excellent weight and balance. On the palate are flavors of Oloroso sherry and bitter chocolate sauce, which has been spread liberally over homemade plum pudding. This is all infused with fabulous spicy notes - cinnamon, allspice and nutmeg. Full bodied with smooth tannins.The finish is long and lingering.