Learn more
Size750mL Proof100 (50% ABV) *Please note that the ABV of this bottle may vary
Distilled from grain grown by four different farmers in central Islay, Bruichladdich Islay Barley 2009 is celebrates the nuances of terroir within the island, brought out via Bruichladdich Distillery’s Victorian machinery and historic distillation processes.
Notify me when this product is back in stock.

This product is available in: DC, NE, NH, ND Unfortunately, we can't ship to PO Boxes and APO addresses. 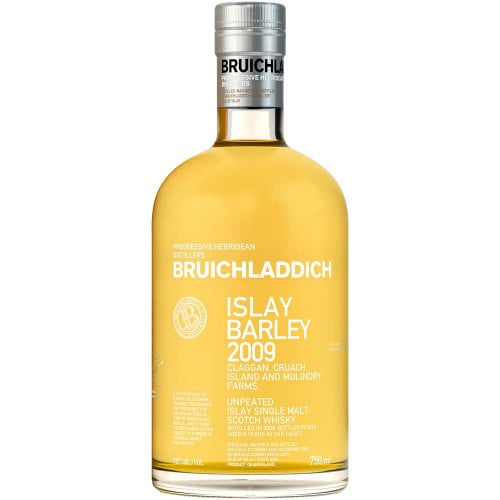 Bruichladdich Single Malt Whisky is made exclusively from unpeated barley grown on four different farms in the center of Islay, providing a very different terroir to the wild maritime location of their 2007 release from Rockside. After the grains are milled and mashed, they are fermented in the distillery's original washbacks, which are made of Douglas Fir. The wood from the washbacks absorbs heat generated during fermentation, and allows for a longer, slower fermentation process as compared to steel, resulting in a more flavorful and rich whisky.

The Bruichladdich Islay Barley series celebrates the nuances of terroir within Islay. Trickle distilled and matured for its entire life in American oak casks, the whisky has an aroma of ripe gooseberries, dark plums, and burnt oak, giving way to malty sweet notes of cereal, nougat, and citrus, and finishes with a touch of vanilla.

The Bruichladdich Islay Barley 2009 has an aroma of ripe gooseberries, dark plums, and burnt oak, giving way to malty sweet notes of cereal, nougat, and citrus, and finishes with a touch of vanilla.