Rating:
93%
(1)
I have traveled the world and sampled many attempts at pleasing nectars, but it is solely this distillation of Islay; a tiny, charismatic Scottish isle, that has claimed my palate." - Nick Offerman
Add to Wish List
Notify me when this product is back in stock.

Lagavulin Single Malt Scotch Whisky is known as one of the most intense, smoky single malt whiskies ever made — the peated barley used to create Lagavulin Single Malt has up to twenty times as much exposure to peat smoke as compared to typical Scotches. Once the grains used to craft Lagavulin Whisky have been harvested and malted, they are dried over a peat and gas fire calibrated specifically to produce Lagavulin's signature, bold flavor profile.

Inspired by Hollywood celebrity Nick Offerman from the hit TV show Parks & Recreation, this Lagavulin Nick Offerman Edition is an 11-year-old Islay Single Malt aged for 11 years. "I have traveled the world and sampled many attempts at pleasing nectars, but it is solely this distillation of Islay; a tiny, charismatic Scottish isle, that has claimed my palate." - Nick Offerman

Smoke on the nose with a hint of sea breeze. The palate is smoked with notes of caramelized banana, smooth vanilla, and charred marshmallow. The finish is dry and subtle with salted caramel. 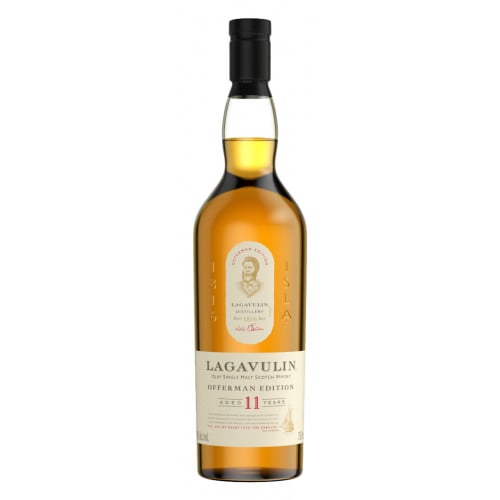