$241.99
Caskers Rewards members earn up to 12 store points back when buying this bottle.

This product is available in: DC, MI, NV, NY, RI Unfortunately, we can't ship to PO Boxes and APO addresses.

Size750mL Proof86 (43% ABV)
Aged for 21 years, this whisky earned the Gold Medal at the San Francisco World Spirits Competition.
Notify me when this product is back in stock.

This product is available in: DC, MI, NV, NY, RI Unfortunately, we can't ship to PO Boxes and APO addresses.

Caskers Rewards Caskers Rewards members earn up to 12 store points back when buying this bottle. Learn more
Out of stock
Skip to the end of the images gallery 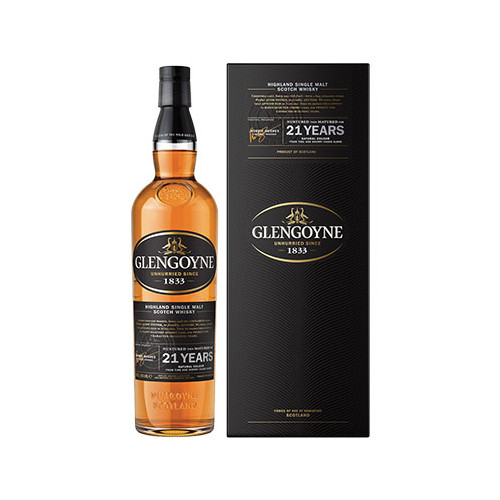 Following distillation, Glengoyne 21 Year Old Single Malt Scotch Whisky is matured for 21 years in sherry casks crafted from Spanish oak. The process for selecting and coppering these casks takes six years: oak trees are selected and felled in the North of Spain and the wood from these trees is cut into staves. After the staves have dried for three years, the casks are coopered at Tevasa Cooperage in Spain, filled with Oloroso sherry for approximately 28 months and then emptied before being shipped to Glengoyne.

As a result of these incredible and carefully selected casks, the whisky has an aroma of Christmas cake, honey and red fruits that gives way to notes of plums, berries and creamy vanilla on the palate. The finish is lush, elegant and full, with touches of sherry and red fruit underlying hints of cloves and spices.

Aroma of Christmas cake, honey and red fruits that gives way to notes of plums, berries and creamy vanilla on the palate. Finish is lush, elegant and full, with touches of sherry and red fruit underlying hints of cloves and spices.