Learn more
Size750mL Proof85 (42.5% ABV) *Please note that the ABV of this bottle may vary
A celebration of its Dutch origins, this gin is infused with a dozen unique herbs and botanicals.
Notify me when this product is back in stock. 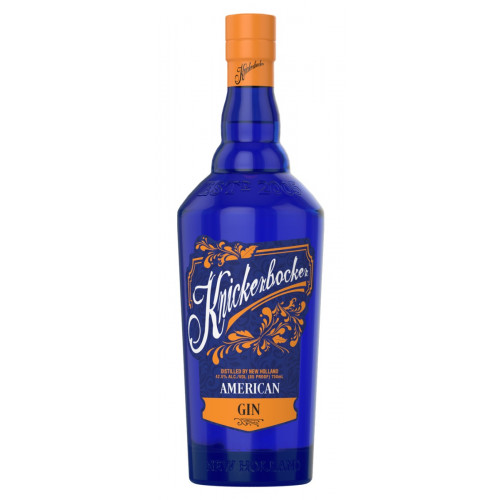 Knickerbocker Gin, which is crafted at New Holland Brewery and Artisanal Spirits, celebrates the rich Dutch tradition of exploration and distillation (Knickerbocker was a common surname of the early settlers who colonized New Netherland). Situated on the banks of Lake Macatawa in Holland, Michigan, New Holland is best known for brewing craft beers such as Dragon's Milk Ale and White Hatter Pale Ale. In 2005, however, Brett VanderKamp, the brewery's co-founder, added a still and began distilling spirits.

Knickerbocker Gin is a bold, vibrant gin that is twice distilled with a dozen unique herbs and botanicals, including juniper berries, coriander, angelica root, orange zest, lemon zest, cinnamon, ginger root, orris root, cardamom, fennel, clove and nutmeg. Following the second distillation, the gin is filtered three times through particulate filters, which remove any remaining impurities and sediment, and then bottled by hand at 85 proof.

The gin has an aroma of orange and citrus zest, followed by notes of anise and ginger, which are complemented by a subtle juniper undertone. Medium bodied, it has a clean and mildly spicy finish. Knickerbocker Gin earned a score of 91 points from the Beverage Testing Institute in 2013.

Celebrate the history of gin and pick up a bottle of Knickerbocker today!

Notes of orange and citrus zest, followed by touches of anise and ginger, which are complemented by a subtle juniper undertone. Medium bodied with a clean and mildly spicy finish.