Size750mL Proof82 (41% ABV)
This gin is crafted from coastal lemons sourced from Sicily and the Amalfi Coast, where some of the best citrus in the worlds is grown. 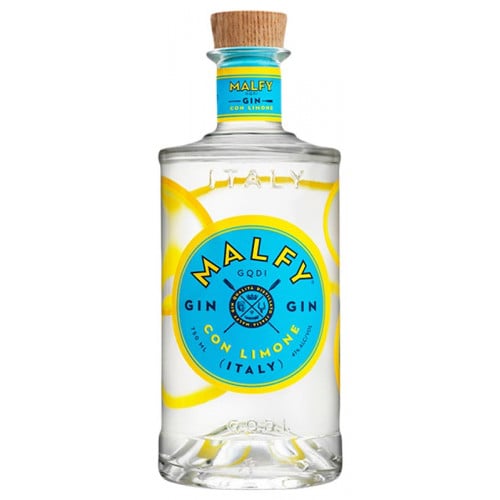 Malfy Gin is owned by Biggar and Leith. A New York-based spirits entity that is the reincarnation of the business founded by Mr. Thomas Gladstone, the great-great-great-grandfather of the current owner, originally founded in Edinburgh, Scotland.

The distillery is located in Moncalieri, situated just outside of the city of Torino; the facility is renowned for its production of wines, spirits, and liqueurs. Torino Distillati was established in 1906. To this day the distillery is run by the Vergnano family; Carlo and his wife Piera as well as their children Rita and Valter. The gin is distilled by Denis Muni and Pepe Ronco.

Citrus is a longstanding symbol of Italian culture, and Malfy gin is crafted using a selection of coastal grown Italian lemons sourced from Amalfi and Sicily. Biggar and Leith is based in New York where they are managing their small portfolio of spirits produced locally, and mixed and aged under contract with distilleries in Cognac, France; Turin, Italy; and other regional producers.

This family-owned producer has been manufacturing spirits for several generations. The location where Malfi Gin con Limone is made is the perfect location for sourcing of Italian lemons. The name is derived from the famous "Amalfi Coast" the region of southern Italy and Sicily where some of the best citrus in the worlds grown. The remaining ingredients include juniper as well as five other botanicals including coriander, angelica root, and cassia bark.

On the nose are notes of baked goods, with a hearty dose of lemon zest. The palate carries more flavors of lemon with underlying notes of juniper and coriander. The finish is clean, crisp, and fresh.