Size750mL Proof80 (40% ABV)
This single malt Irish whiskey was aged for 14 years in ex-bourbon casks before being transferred by the Master Distiller into sherry-infused casks made specially for Knappogue Castle, where it rested for an additional 21 months. 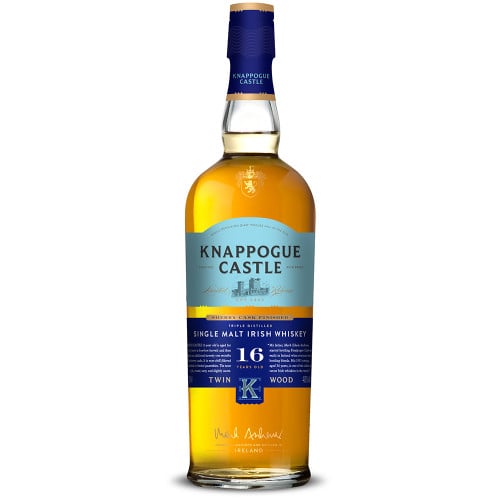 As a result of this meticulous aging process, Knappogue 16 Year Old Twin Wood Single Malt Irish Whiskey has a deep, reddish gold color and a rich bouquet of fruits, nuts, malts and peppery spice. The palate is oily and filled with dark chocolate, with further notes of sherry and vanilla extract appearing on the body. The whiskey finishes dry and semi-sweet, with pleasant notes of oak and sherry rounding things out.

Only 4,500 bottles of this impeccable whiskey were ever produced, each numbered and signed.

Deep, reddish gold color and a rich bouquet of fruits, nuts, malts and peppery spice. The palate is oily and filled with dark chocolate, with further notes of sherry and vanilla extract appearing on the body. The whiskey finishes dry and semi-sweet, with pleasant notes of oak and sherry rounding things out.