Caskers Rewards members earn up to 3 store points back when buying this bottle.
Size750mL Proof92 (46% ABV)
This inspiring Irish whiskey won a double gold medal and "Best Single Malt Irish Whiskey" at the 2016 San Francisco World Spirits Competition.
Notify me when this product is back in stock. 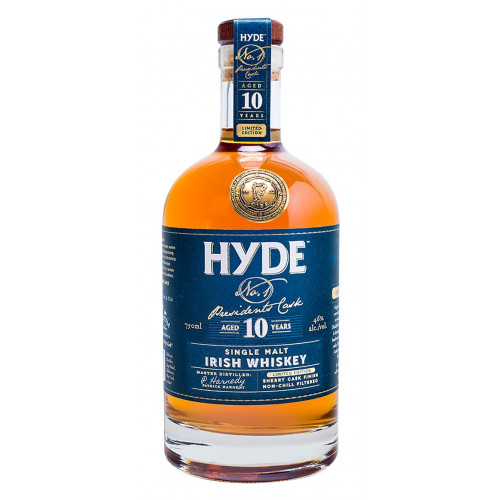 Hibernia Distillers was founded in 2014 by Conor and Alan Hyde in Skibbereen, Ireland. The brothers reached meteoric success with their traditional single malt and single grain Irish whiskeys earning themselves a strong reputation for producing high quality, award-winning Irish spirit.

Hyde Single Malt Irish whiskey is crafted from 100% malted Irish barley, and made in small batches using a traditional copper pot still. The whiskey is then matured for over ten years in flame-charred, first fill, ex-bourbon casks sourced from Kentucky before being finished for an additional six months in either a Sherry or Oak casks.

Two separate casks are used to age their sherry finished whiskey. For the first decade, Hyde single malt is aged in flame-charred, first fill, 200-liter oak bourbon barrels. The whiskey is then transferred into toasted Oloroso sherry casks, for an additional ten months. These casks are 250-liter "Hogshead" barrels crafted from white oak and sourced from Cadiz in the Andalusia region of South West Spain.

On the nose are delightful peaches & cream, vanilla, barley malt softness, with citrus, sweet, honey, caramel, chocolate, orange, lemon, banana, & infused with spices. The palate is wonderfully smooth yet complex, creamy yet fruity with notes of caramel and Manuka honey, apricot, plum, and a silky malt texture. The finish is rich, spicy, & oaky. It lingers in the mouth with a long rich finish.