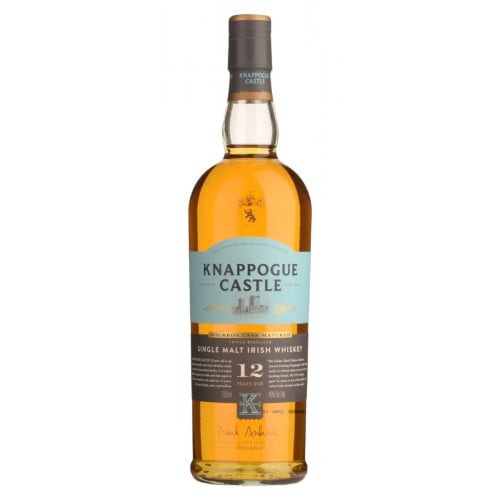 While Mrs. Andrews focused on the architectural details of the project, Mark Andrews began buying casks of the finest pot still Irish whiskey and bottling them under his own independent label, suitably named Knappogue Castle. Andrews was unusual in that he chose to bottle single malt Irish whiskies, as opposed to blends, which most others were choosing at the time. The last of Andrews’ selections, Knappogue Castle 1951, was distilled at the now-defunct B. Daly distillery, and since become the oldest and rarest publicly-available Irish whiskey in existence.

Knappogue 12 Year Old Irish Whiskey carries on the tradition started by the Andrews over a half-century ago. As a single malt Irish whiskey, it is crafted exclusively from unpeated, malted barley before being triple distilled through both pot and column stills. After distillation, it is aged for a minimum of 12 years in ex-bourbon casks before being bottled at 80 proof.

As a result of this exceptionally long aging process, Knoppague Castle 12 Year Old Irish Whiskey has a fresh, clean aroma with notes of toasted marshmallow, honey, cream and vanilla. The palate is filled with citrus flavors, including peach, apple, pineapple as well as coconut, and leads to a robust finish complete with oak, black pepper, raisins and spice.

Fresh, clean aroma with notes of toasted marshmallow, honey, cream and vanilla. The palate is filled with citrus flavors, including peach, apple, pineapple as well as coconut, and leads to a robust finish complete with oak, black pepper, raisins and spice.