Size750mL Proof80 (40% ABV)
Triple distilled from three grains and aged for 12 to 15 years in a combination of ex-bourbon and ex-sherry casks, this spectacular Irish Whiskey has been named “Best in Class.”
Notify me when this product is back in stock. 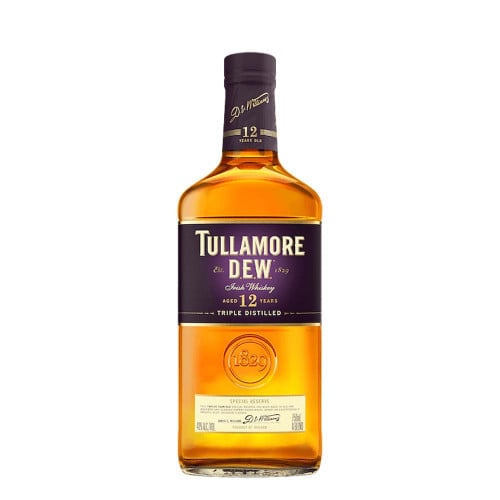 Tullamore DEW 12 Year Old Special Reserve Irish Whiskey is a triple distilled blend of all three types of Irish whiskies, each aged from 12 to 15 years. In particular, the pot still and malt whiskies — aged in a combination of ex-bourbon and ex-sherry casks — play outsized roles in this blend, contributing to the whiskey’s unique character and complexity.

As a result of both the blending and aging process, Tullamore DEW 12 Year Old Special Reserve Irish Whiskey has an aroma of roasted nuts, red wine, cherry blossoms and a hint of citrus zest. That gives way to bold notes of cinnamon spice on the palate, bolstered by an undercurrent of sherry, vanilla and whipped cream. The finish is long and smooth, with more notes of sherry balanced by dark chocolate and almond butter.

Tullamore DEW 12 Year Old Special Reserve earned the Double Gold at the San Francisco World Spirits Competition in 2013 and was named “Best in Class” at the 2012 International Spirits Challenge.

Pick up a “Best in Class” Irish whiskey today!

Aroma of roasted nuts, red wine, cherry blossoms and a hint of citrus zest. That gives way to bold notes of cinnamon spice on the palate, bolstered by an undercurrent of sherry, vanilla and whipped cream. Finish is long and smooth, with more notes of sherry balanced by dark chocolate and almond butter.