Size750mL Proof86 (43% ABV)
After being initially matured in sherry casks, this Irish single malt gets finished in bog oak casks for 4 to 6 months. These are made by West Cork themselves ― they are charred using bog oak from the Glengarriff Forest. 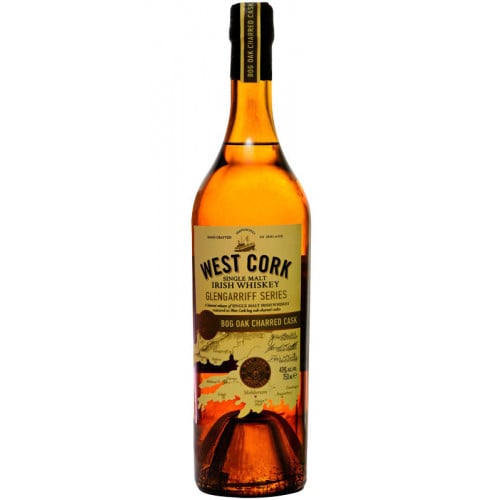 Distilled, matured, and bottled on-site, West Cork offers a diverse lineup of Irish whiskey that is triple-distilled, non-chill filtered, and crafted using local ingredients. West Cork Glengarriff Bog Oak Charred Cask Single Malt is first aged in sherry casks for 4 years. It's then finished in bog oak casks that West Cork made themselves. They harvested some bog oak from the Glengarriff Forest and used it to char the barrels where the spirit spends between 4 to 6 months. Bottled at 86 proof, it's a spicy, malty, and peppery whiskey with dried fruit notes.

Grab a bottle of this unique Irish whiskey today!

The nose has spice, orchard fruit, dried leather, and a pleasant sweetness with dried fruit aromas. The palate is intensely spicy with malt, toffee, oak, fruit, and cracked pepper notes. The notes linger on the finish, where they are joined by hints of smoke.