$46.99
Caskers Rewards members earn up to 2 store points back when buying this bottle.

Size750mL Proof86 (43% ABV)
The Whistler Irish Whiskey Calvados Cask Finish is a velvety and creamy expression that was first aged for 4 years in ex-bourbon casks. The blend is then filled into 10-year-old 400-liter French Oak Calvados casks from Normandy where it rests for 15 months.
Notify me when this product is back in stock. 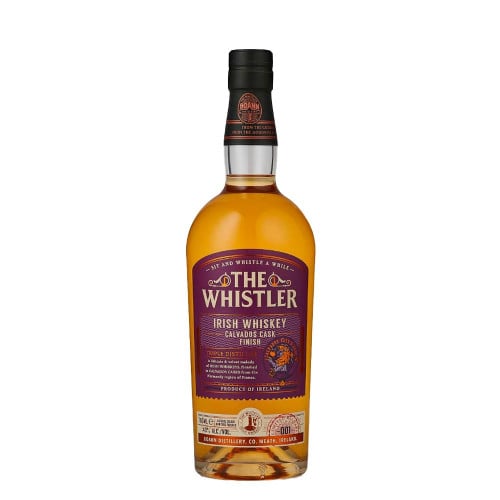 All the ingredients are 100% natural, including locally grown barley from native farmers and water from the Boyne Valley well. Environmentally conscious, they recycle their water and harness the heat that is generated during distillation, which then helps run their packaging lines and heat their restaurant, visitor center, and offices. Distillation byproducts are used as animal feed.

A collaboration between Boann Distillery and the renowned Calvados producers Chateau du Breuil in Normandy, France, The Whistler Irish Whiskey Calvados Cask Finish starts with a signature blend of 35% single malt and 65% grain whiskey that were both aged for 4 years in ex-bourbon casks. The blend is then filled into 10-year-old 400-liter French Oak Calvados casks from Normandy where it rests for 15 months. Bottled at 86 proof, this fantastically velvety whiskey boasts flavors of fresh apple, creamy toffee, hints of cinnamon, apricot, and baked caramelized apple.

Get 1 of 3,000 annually produced bottles today!