Size700mL Proof80 (40% ABV)
Released in 2020, this rum is a celebration of the iconic rock band Kiss and their early days. It's a blend of Caribbean rums from the Dominican Republic, Barbados, Guyana, and Guatemala. Aged from 3 to 15 years in ex-bourbon casks, the rum was bottled unfiltered at 80 proof.
Notify me when this product is back in stock. 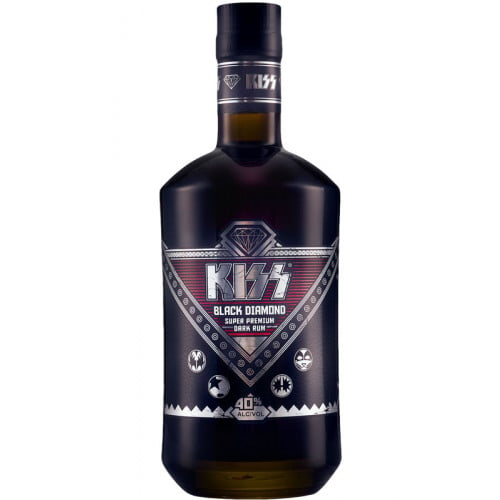 Known for their timeless rock classics as well as their extravagant makeup and stage outfits, Kiss is widely regarded as one of the most influential bands in the history of rock music. Today, the band is still going strong after 50 years in the music industry and more than 100 million albums sold. The band teamed up with Brands For Fans for the release of Drink It Up by KISS ― a portfolio of premium spirits.

Founded in 2012, Brands For Fans is a Swedish company that operates on the global market and specializes in working with bands and artists who want to go into the spirits business. They've already worked with several legends that include Judas Priest, Ozzy Osborne, Motörhead, Slayer, Scorpions, In Flames, Rammstein, and Ghost, releasing so-called "liquid merchandise." The Drink It Up by KISS lineup currently consists of 3 different rums and a gin.

Launched in 2020, Kiss: Black Diamond is named after the iconic song from the band's debut album. It's a blend of Caribbean rums from the Dominican Republic, Barbados, Guyana, and Guatemala. Aged from 3 to 15 years in ex-bourbon casks, the rum was bottled unfiltered at 80 proof. The design is a reference to the band's early history and their iconic image. The rich, oaky, and fruity spirit has garnered several prestigious awards in the few years since its launch.

Grab your bottle of this rockin' rum today!