Size750mL Proof80 (40% ABV)
This entry in Bacardi's Premium Range has spent at least a decade in charred oak barrels, making for a velvety-smooth and full-bodied drink. 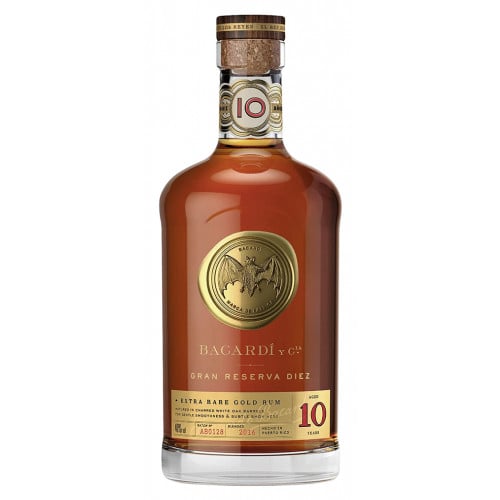 Bacardi Gran Reserva Diez from their Premium Range was meticulously blended and aged for at least 10 years in charred oak barrels under the scorching Caribbean sun. The dark gold rum is charcoal-filtered and bottled at 80 proof. It's as smooth as it is luxurious, extra smooth and full-bodied with prominent caramel, candied fruit, vanilla, and oak notes. There are plenty of tropical fruit notes on the palate, including banana, kiwi, as well as pear.

The velvety-smooth and full-bodied rum has prominent caramel, candied fruit, vanilla, and oak notes. There are plenty of tropical fruit notes on the palate, including banana, kiwi, as well as pear.