Size750mL Proof100 (50% ABV)
This limited-edition whiskey is a collaboration between Kentucky Owl's own Master Blender John Rhea and Louise McGuane of J.J. Corry Irish Whiskey fame. It's a blend of Kentucky straight bourbons aged between 4 and 8 years. 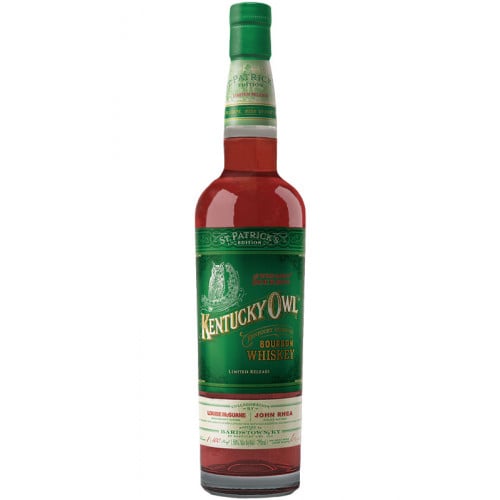 Kentucky Owl was founded by Charles Mortimer Dedman, a local pharmacist, in 1879. After marrying his wife, Dedman was given a large parcel of land on the banks of the Kentucky River, as a wedding gift from his adopted father who was a local town judge. C.M. Dedman Distillery was established here on the banks of the Kentucky River, producing "The Wise Man's Bourbon" under Distilled Spirits Plant Designation “No. 16”, one of Kentucky’s original distilleries and part of a booming industry.

Kentucky Owl achieved much success and production continued until Prohibition halted distillation. The family-run facility was no match for the “forces of teetotalism, temperance and eventually, the Feds”. In 1916, Prohibition left several local distilleries with ample reserves of bourbon. As for Kentucky Owl, approximately 250,000 gallons of bourbon were left over in various stages of aging. Today these reserves would be worth about $40 million in inventory. After Federal agents descended on the Dedman’s distillery, the bourbon was seized and shipped up the river by barge to the state capital in Frankfort for “safekeeping” in a warehouse.

Kentucky Owl St. Patrick's Edition is a limited-release blend of Kentucky straight bourbons aged between 4 and 8 years. With each contributing their own aromas and flavors, you'll find caramel and vanilla notes from the older whiskey, fruit and spice from high-rye bourbons, as well as sweetness and citrus from the wheated bourbon. The expression is a collaboration between Kentucky Owl's own Master Blender John Rhea and Louise McGuane of J.J. Corry Irish Whiskey fame. It's bottled at 100 proof.

Grab a bottle of this limited-edition whiskey today!

The nose is sweet with a perfect balance of caramel, honey, and spice aromas. The caramel returns on the palate with butterscotch, cinnamon rolls, as well as hints of orange, citrus zest, and chocolate. The fruitiness carries on through the finish with additional vanilla and oak notes.