Rating:
100%
2
Caskers Rewards members earn up to 18 store points back when buying this bottle.
Size750mL Proof87.6 (43.8% ABV)
Overseen by Johnnie Walker Master Blender, Dr. Jim Beverage, Port Ellen lies at the heart of this incredible expression.
Notify me when this product is back in stock.

Caskers Rewards Caskers Rewards members earn up to 18 store points back when buying this bottle. Learn more
Out of stock
Skip to the end of the images gallery 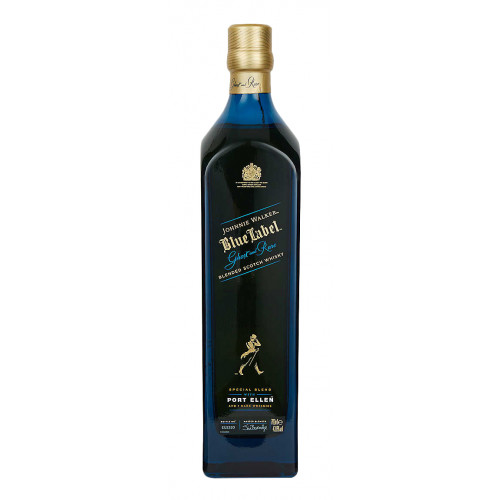 This Johnnie Walker Blue Label Ghost and Rare is the second edition in this series of special limited edition releases. The blend is comprised of grain whiskies from long defunct “ghost” Scotch whisky distilleries, highlighting one of the most exalted shuttered distilleries on Islay—Port Ellen. The other whiskies in the blend include Caledonian and Carsebridge, harmonizing Port Ellen’s peaty and iodine character. Five additional rare malts (Mortlach, Dailuaine, Cragganmore, Blair Athol, and Oban) are married into the blend yielding a well-rounded mouthfeel and finish. Each of these whiskies are aged at least 20 years. Overseen by Johnnie Walker Master Blender, Dr. Jim Beverage, Port Ellen lies at the heart of this incredible expression, imparting a delicious peatiness and a dose of brine. The result is a whisky with layers of creamy vanilla sweetness and rolling waves of waxy citrus, rich malt and tropical fruit notes - all perfectly balanced by the distinctive maritime smokiness of Port Ellen that lingers in, the long and warming finish.

Layers of creamy vanilla sweetness and rolling waves of waxy citrus, rich malt and tropical fruit notes - all perfectly balanced by the distinctive maritime smokiness of Port Ellen that lingers in, the long and warming finish.