Learn more
Size750mL Proof80 (40% ABV) *Please note that the ABV of this bottle may vary
From Johnnie Walker’s Blenders' Batch series. Hand crafted with passion by expert blender Aimee Gibson.
Notify me when this product is back in stock. 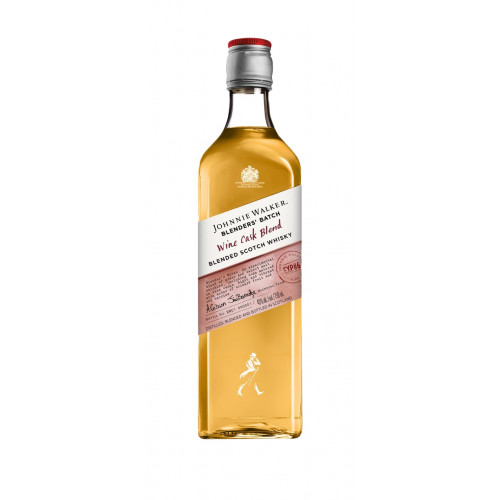 This Blenders' Batch Wine Cask whisky is a blend from the Cameronbridge and Clyenlish distilleries, aged in wine casks. The blend is a new lighter style from Johnnie Walker’s Blenders' Batch series hand crafted with passion by expert blender Aimee Gibson. “Aimee Gibson has spent the last two years working with an inventory of whiskies matured in wine casks, part of an experiment in maturation set in motion by her boss, Mast Blender Jim Beverage, almost a decade ago. Aimee realized that a very special common theme of enchanted flavors was possible from the use of wine casks” (producer).

A touch of peat on the nose that opens to delicate fruit of peaches and pineapple, plus vanilla-scented tobacco. A rich coating mouthfeel with balanced dose of sweet vanilla, buttery pastry, and stone fruit, like an apricot tart. The finish is bright and malty with vanilla bean, peaches & cream, raspberry, and sweet cigar.