Learn more
Size750mL Proof100 (50% ABV) *Please note that the ABV of this bottle may vary
This award-winning Scotch is made from 50% malt and 50% grain whisky, and is bottled at 50% ABV.
Notify me when this product is back in stock.

This product is available in: AZ, OK, RI, WA Unfortunately, we can't ship to PO Boxes and APO addresses. 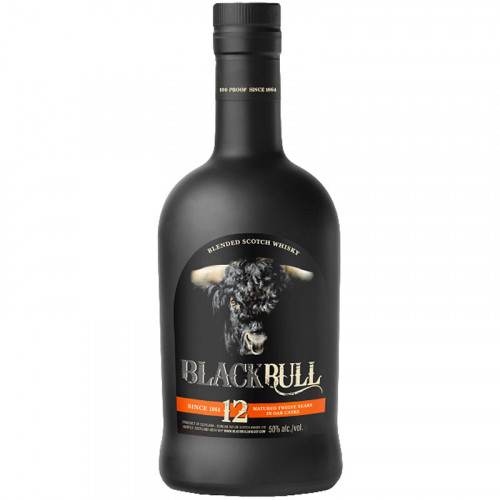 Black Bull 12 Year Old Scotch Whisky is crafted from a blend of highland and speyside whiskies aged for a minimum of twelve years in refill ex-sherry European oak butts and refill ex-bourbon American oak hogshead casks. The whisky has robust, chunky aromas of sherry, fresh strawberries, cherry pie and vanilla. The bold nose gives way to a palate filled with lemon meringue, fudge, almonds and baked apples, and leads to a palate accented by sweet caramel and toffee butter.

Black Bull 12 was named the #1 Best Blended Scotch Whisky (12 Years and Under) at the 2011 World Whisky Awards.

Now owned by Duncan Taylor, the Black Bull brand stays true to its original philosophy of blending Scotch with a high malt content at high proof — in fact, the Black Bull recipe today calls for 50% malt whisky and 50% grain whisky to be bottled at exactly 50% ABV. While those numbers are certainly convenient, the team at Duncan Taylor is always innovating, sampling the choicest single malt and single grain whiskies and selecting only those which are at their absolute peak.
Explore all Black Bull bottles >>

Robust, chunky aromas of sherry, fresh strawberries, cherry pie and vanilla. The bold nose gives way to a palate filled with lemon meringue, fudge, almonds and baked apples, and leads to a palate accented by sweet caramel and toffee butter.