Learn more
Size750mL Proof80 (40% ABV) *Please note that the ABV of this bottle may vary
Sourced from the Speyside, Highlands and Islay regions of Scotland, this whisky is made in homage to the legendary Ron Burgundy.
Notify me when this product is back in stock. 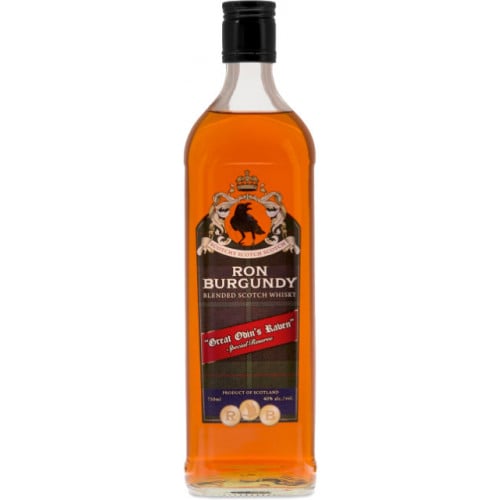 A five-time Emmy Award-winning journalist, Ronald Joseph Aaron Ron Burgundy was the co-anchor of KVWN Channel 4 News Team in San Diego (pronounced San De-aago) from 1964 to 1977. "I don't know how to put this, but I'm kind of a big deal," says Burgundy, about himself. "People know me."

Ron Burgundy Great Odin's Raven Special Reserve Scotch Whisky is a blend of 60% malt whisky and 40% grain whisky sourced from the Speyside, Highlands and Islay regions of Scotland. "It has a formidable scent," says Burgundy. "It stings the nostrils — in a good way. "The aroma gives way to notes of rich mahogany and old, leather-bound manuscripts. Needless to say, this Scotch is not available at the Toilet Store. In addition, studies suggest that 60% of the time, this whisky will get you drunk every time.

"I love Scotch," says Burgundy. "Scotchy, Scotch, Scotch. Here it goes down. Down into my belly."