Size750mL Proof86 (43% ABV)
A premium blended Scotch whisky from the Isle of Skye. Based on the Macleod family's 19th century, each Island and Speyside malt has been aged for at least 12 years.
Notify me when this product is back in stock. 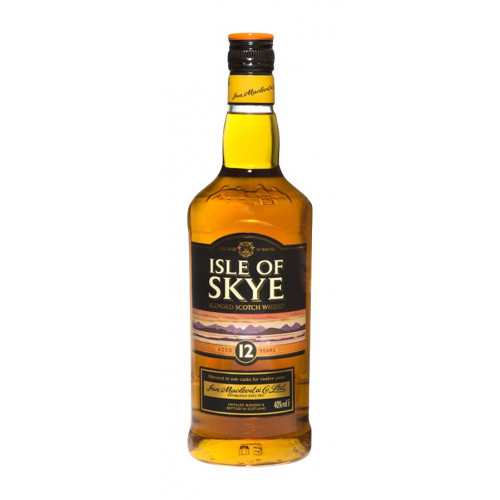 Back in 1936, Leonard Russell Senior founded Ian Macleod & Company Ltd., a whisky broking company. Ian Macleod Distillers is an independent, family-owned company with an impressive portfolio of premium quality spirits. In 1963, Isle of Skye blended Scotch whisky was the first brand they acquired. Today, this is the world's 10th largest Scotch whisky company that owns brands from Glengoyne, Tamdhu, Smokehead Scotch whiskies and Edinburgh Gin among others.

Located off the West Coast of mainland Scotland, the Isle of Skye is famous for its natural beauty and wildlife. It's the largest and most northern island in the Inner Hebrides – it is also the home of the Clan Macleod and where Isle of Skye Blended Scotch Whisky comes from.

Blended whiskies contain single malts and single grains and if scotch, they must be aged for at least three years in oak. Isle of Skye 12 Year Old Blended Scotch Whisky was created based on the Macleod family's 19th century recipe. Each of the Island and Speyside malts in the blend are aged at least 12 years – but most of them are aged for much longer. After they are blended, they're matured in oak casks, which is unusual as most blends go straight to bottle. Bottled at 86 proof, this is an exceptionally smooth and mellow blended scotch whisky with sweet Speyside flavors influenced by smoky and peaty Island influences. One of the most premium blends out there.

Get your premium Scotch blend today!

Sweet aromas of honey and vanilla from Speyside influence greet you on the nose. The palate is smooth and smoky as well as peaty from the Island flavors. The finish is long and complex. A well balanced, distinctive blend.