Learn more
Size750mL Proof100 (50% ABV) *Please note that the ABV of this bottle may vary
Aged for ten years, this bourbon earned a score of 96 points at the Ultimate Spirits Challenge in 2014.
Notify me when this product is back in stock. 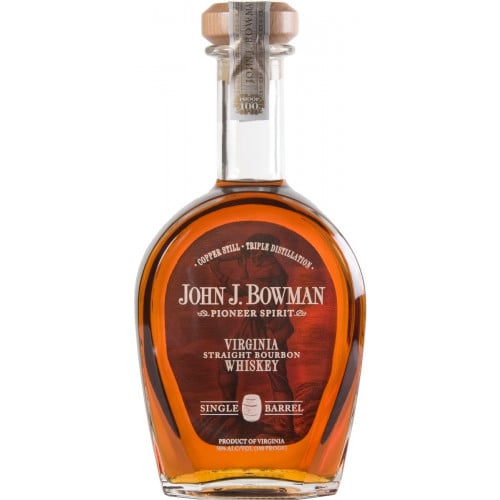 Following the repeal of Prohibition in 1933, Abram S. Bowman purchased the Sunset Hills Estate, situated in the shadow of the Blue Ridge Mountains of northern Virginia. Together with his sons, Bowman began farming the estate and within a few years, Bowman was able to harvest more corn, wheat and rye than he was able to sell at the market. As a result, Bowman built a distillery at Sunset Hills, and began distilling the excess grains he harvested into bourbon.

John J. Bowman Pioneer Spirit Virginia Straight Bourbon Whiskey pays homage to the legacy and pioneering spirit of Abram Bowman’s great, great uncle, Colonel John J. Bowman. An excellent horseman, Bowman was considered to be one of the “Four Centaurs of Cedar Creek.” In 1779, Bowman led a force of 300 soldiers against the Shawnee town of Chillicothe in order to prevent Native Americans from attacking frontiersman settling in Virginia. Just two years later, Bowman served as justice of the peace over the first county court held in Kentucky and was later appointed military governor of Kentucky County.

John J. Bourbon is made from a mash of corn, malted barley and rye that is fermented with a proprietary strain of yeast and distilled three times through “Mary,” a copper-pot still named in honor of John Bowman’s mother. After distillation, the bourbon is aged for ten years in new, American oak casks with a #3 char. Following its decade-long beautyrest, the bourbon is brought to 100 proof before each single-barrel bottle is filled and labeled by hand.

John J. Bowman Virginia Straight Bourbon Whiskey has a fragrant nose of marmalade and soft biscuits with notes of toffee, leather, figs and almonds. The center-palette is dominated by signature notes of apples and pears which lead to a long, dry finish. John J. Bowman Bourbon earned the Double Gold Medal at the 2012 San Francisco World Spirits Competition and the Silver Medal at the 2011 Fifty Best Tasting Competition. In addition, it earned a score of 96 points at the Ultimate Spirits Challenge in 2014 – two points more that Pappy Van Winkle’s 15 year old bourbon.

Pick up an award-winning bourbon today!

Fragrant nose of marmalade and soft biscuits with notes of toffee, leather, figs and almonds. Center-palette is dominated by signature notes of apples and pears which lead to a long, dry finish.