Learn more
Size750mL Proof90.2 (45.1% ABV) *Please note that the ABV of this bottle may vary
A truly distinct, tri-whiskey, Kentucky Straight bourbon blend, finished for a year in ex-Cabernet Sauvignon Chappellet Wine French Oak Casks.
Notify me when this product is back in stock.

This product is available in: CA, IN, NE, ND, TX, WA Unfortunately, we can't ship to PO Boxes and APO addresses. 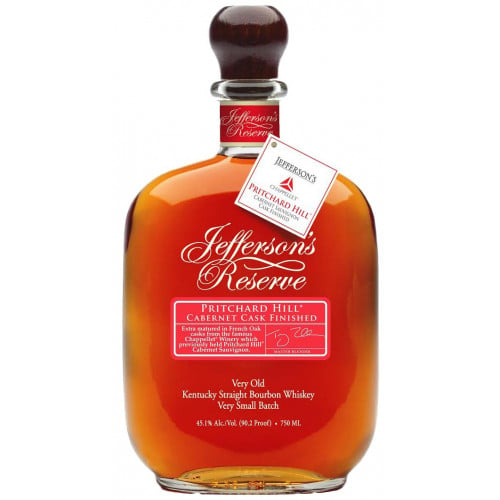 As Jefferson Bourbon’s Master Distiller, Trey Zoeller is an aficionado of the Upper Valley Cabernet Sauvignon wines from the Pritchard Hill region of California. For their limited edition Jefferson’s Pritchard Hill, Trey collaborated with Cyril Chappellet of the Chappellet Estate Winery, using their wine casks to age the special bourbon expression.

This Jeffersons Pritchard Hill release is aged using quite a unique maturation technique; a twin wood aging process, that incorporates a blend of three complex, elegant bourbons that have been aged for one year in new American Oak barrels, and finished in ex-Pritchard Hill Cabernet Sauvignon French Oak casks. The special casks were once situated at the highly elevated, rocky slopes of the Chappellet Vineyard in St. Helena, Napa Valley. “The wine barrels that matured the most sought-after wine in the Chappellet portfolio lend a sweetness to the bourbon by adding notes of dark berry, espresso, and chocolate” (Jefferson’s).

Soft tannins and red wine aromas on the nose, with baking spices and earthy leathery notes. On the palate are sweet flavors of ripened fruits, dates, apricots, Cabernet, zesty lemon, and buttery baked goods. The finish is long and smoky, filled with oak tannins.