Learn more
Size750mL Proof90.2 Proof (45.1% ABV) *Please note that the ABV of this bottle may vary
Made in homage to Thomas Jefferson, this bourbon was first aged in new American oak barrels for approximately eight years before being extra-matured in ex-rum barrels from Gosling’s Family Reserve for an additional fifteen months.
Notify me when this product is back in stock.

This product is available in: CT, NV, TX, WA Unfortunately, we can't ship to PO Boxes and APO addresses. 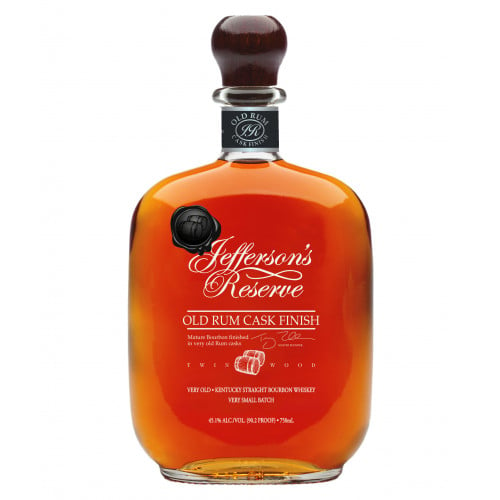 Jefferson’s Reserve Old Rum Cask Finish Bourbon was first aged in new American oak barrels for approximately eight years before being extra-matured in ex-rum barrels from Gosling’s Family Reserve for an additional fifteen months. Gosling’s is a high-caliber rum producer out of Bermuda that is particularly well-known for using ex-bourbon barrels to age their rum! These special barrels give Jefferson’s Reserve Old Rum Cask Finish Bourbon its unique and robust characteristics.

As a result of this unique aging process, the bourbon has an aroma of bananas, vanilla, and almond, leading to a palate of salt, spiced rum, maple, and dried fruits. The long finish leaves the taste of cereal grains lingering on the tongue.

Pick up a bottle of this unique crossover spirit today!

Aroma of bananas, vanilla, and almond, leading to a palate of salt, spiced rum, maple, and dried fruits. The long finish leaves the taste of cereal grains lingering on the tongue.