Rating:
80%
1
Caskers Rewards members earn up to 4 store points back when buying this bottle.
Size750mL Proof90 (45% ABV)
Crafted very small batches, this distinctive bourbon crosses the equator a total of four times before making its way into your glass.
Notify me when this product is back in stock. 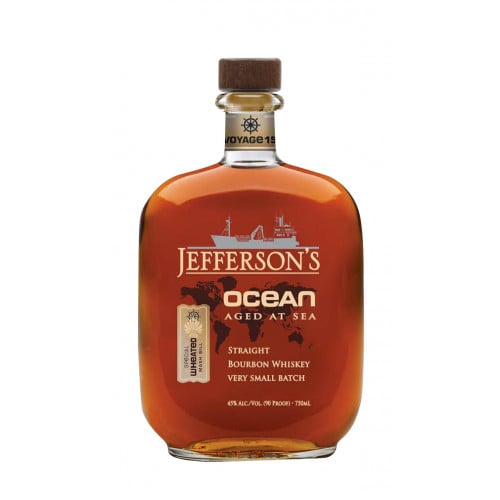 Ocean’s Voyage is a series that launched in 2012. Trey Zoeller, Jefferson’s master blender, partnered with the founder of OCEARCH, Chris Fischer to create this special range. OCEARCH is a renowned non-profit organization that studies and monitors marine species, specifically the great white and tiger shark. OCEARCH gathers data on the ecology, physiology, and behavior of sharks in the North Atlantic Ocean, and to increase the sample size of the Great White Shark research.

The idea was inspired by the concept that the constant movement of liquid in the barrel ages whiskey faster due to an increase in contact with wood. Zoeller put five barrels of Jefferson’s bourbon on the MV OCEARCH, a 126’ Cat-powered at-sea laboratory. Jefferson's Ocean Bourbon was born. The barrels stayed aboard the ship for over three years passing through the Panama Canal a total of six times.

After the success of the first release, Jefferson’s ocean range grew exponentially, shipping hundreds of barrels around the world. A typical barrel crosses the equator at least four times, traveling to five continents. Jefferson’s Ocean Voyage Wheated is batch number 15. Crafted very small batches, this bourbon is distilled from a proprietary wheat mash bill. Wheat, replacing the typical rye, yields a fresh make spirit with a more subtle flavor, which allows for the maturation process to shine, profoundly enhancing the wood’s vanilla and the corn’s sweetness.

Traveling to 30 ports, this Ocean Voyage travels across the equator a total of 4 times, passing through areas of extreme heat, an element which acts as a catalyst that yields a substantial caramelization effect, caramelizing the sugars. The expedition also imparts a powerful brine to the spirit due to the sea salt air. Adding to the trifecta of elements is the constant movement of the barrels on the ship, which allows for more contact between liquid and wood. This dynamic maturation process creates an incredibly unique and exquisite spirit.