Learn more
Size750mL Proof86 (43% ABV) *Please note that the ABV of this bottle may vary
Curated by fifth-generation head cooper Ger Buckley, Jameson Cooper’s Croze is designed to showcase the characteristics imparted by the barrels, as well as the important role played by the cooper in the whiskey making process.
Notify me when this product is back in stock. 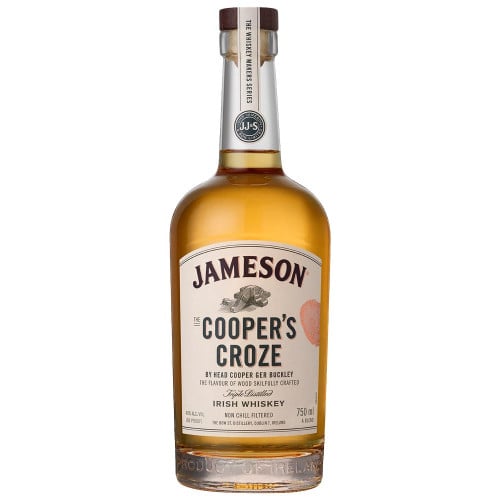 Jameson Cooper’s Croze is a limited release of super-premium Irish whiskey, the first of a new series that features three different blends, each developed by a master craftsman to highlight a specific part of the whiskey-making process. Each bottle in the Whiskey Makers Series is named after the favorite tool of the respective craft. A croze is a tool that is used by the cooper to make the groove in the lid of the cask.

Curated by fifth-generation head cooper Ger Buckley, Jameson The Cooper’s Croze is designed to showcase the characteristics imparted by the barrels, as well as the important role played by the cooper in the whiskey making process. "I’ve created Jameson The Cooper’s Croze to show the versatility and profound influence barrels have on distinct whiskey flavors," said Buckley. "Barrel making transcends generations, as I’ve used the same methods and tools passed down from my grandfather, that’s the beauty of the craft."

This non chill filtered whiskey bottled at 43% carries the aroma of charred virgin American oak with vanilla sweetness from seasoned bourbon barrels and rich fruit flavors with a balance of floral and spicy notes imparted by the Iberian sherry barrels — you can take the whiskey out of the wood, but you can never take the wood out of the whiskey!

Aroma of charred virgin American oak with vanilla sweetness from seasoned bourbon barrels and rich fruit flavors with a balance of floral and spicy notes imparted by the Iberian sherry barrels.