Size750mL Proof92 (46% ABV)
This bonded, single pot still Irish whiskey is aged for twelve years and is one of the most eagerly-anticipated releases of 2015. It was named Whisky Advocate’s 19th Annual Irish Whiskey of the Year. 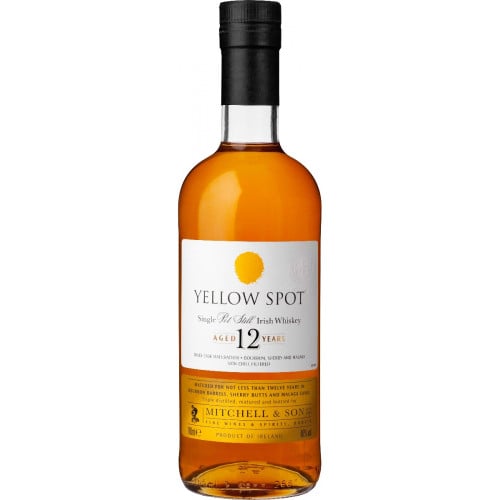 In 1805, the Mitchell & Sons Wine Merchants Company was established in the heart of Dublin, Ireland. By the turn of the 19th century, the Mitchells sold a range of Irish whiskeys under the name "Spot." This name originated from the company's practice of marking casks of different ages with a spot of colored paint. As a result, Mitchell & Sons sold whiskies named Blue Spot, Green Spot, Red Spot and finally Yellow Spot, which was last seen in the mid-to-late 1960s.

Today, Yellow Spot Single Pot Still Irish Whiskey continues to be crafted in the heart of Ireland. The whiskey is made from malted and unmalted barley, which are milled and mashed before being triple-distilled through a traditional pot still. Following distillation, the whiskey is matured for 12 years — the Yellow Spot brand was always aged for this amount of time — in a combination of American Bourbon casks, Spanish sherry butts and Spanish Malaga casks. The inclusion of the single pot still spirit aged in Spanish Malaga casks gives Yellow Spot its famously sweet character. After the various casks have been blended together, Yellow Spot Single Pot Still Irish Whiskey is bottled at 92 proof, just a bit higher than other traditional Irish whiskies which are bottled at 90 proof.

"Pot Still Whiskeys define the traditional flavor character of Irish whiskey and we have seen a renewed interest and growth in the category over the last few years," says Brian Nation, the master distiller at Midleton Distillery, which makes Yellow Spot Whiskey. Yellow Spot Single Pot Still Irish Whiskey has an aroma of red bell peppers, nutmeg, green tea and sweet peaches from the Malaga casks. On the palate, there is a honey sweetness accented by cloves, baked apples, milk chocolate, coffee and creme brulee. The finish is dry and complex, with notes of toasted oak, red grapes and barley.

Yellow Spot Single Pot Still Irish Whiskey was released in the United States in 2015 in extremely limited quantities. The whiskey was named “Irish Whiskey of the Year” by Whisky Advocate in 2016, in addition to winning Gold in the Wizards of Whiskey competition that same year.