Learn more
Size750mL Proof92 (46% ABV) *Please note that the ABV of this bottle may vary
Crafted from 4 exceptional and rare mature Irish whiskeys aged 9 to 28, Batch No. 2 follows in the footsteps of the first release. The complex yet elegant blend is a perfect showcase of J.J. Corry.
Notify me when this product is back in stock.

This product is available in: CA, NE, NY, ND Unfortunately, we can't ship to PO Boxes and APO addresses. 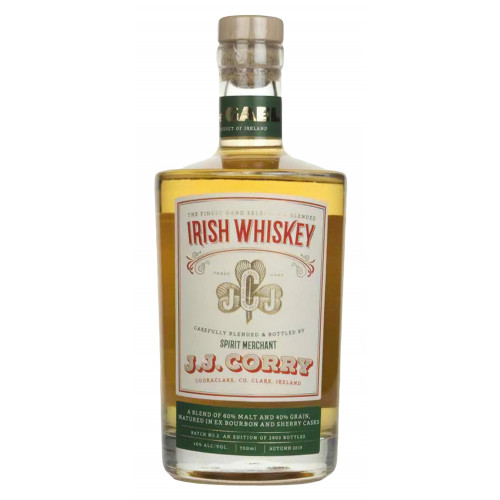 About J.J. Corry 'The Gael' Batch No. 2 Irish Whiskey

Founded in 2015 by Louise McGuane, J.J. Corry Irish Whiskey is Ireland’s first modern whiskey bonder. Irish whiskey bonding is a traditional business model whereby bonders, typically publicans and mercantile owners all across the Island would source casks and new make whiskey spirit which they would age and blend for local customers.

The company sources new make whiskey Spirit from Irish distilleries and matures it in a purpose-built bonded rackhouse on the McGuane family farm in Cooraclare, Co. Clare, right along the Wild Atlantic Way. Whilst waiting for their spirit to come of age, they source & blend rare mature whiskey to create their own unique house style.

Named after a bicycle that J.J. Corry invented, in tribute to his entrepreneurial spirit, their first release, J.J. Corry ‘The Gael’, was a classic style of blended Irish whiskey, bursting with juicy fruit flavors and underlying complexity. It contained unusually mature whiskeys for an Irish blend. The first batch of The Gael was blended using exceptional and rare mature Irish whiskeys and Batch No. 2 is no different. It consists of 40% 9-year-old grain, 30% 17-year-old malt, 26% 13-year-old malt, and 4% 28-year-old malt. The first three were matured in bourbon casks, the last in ex-sherry. It's a big, complex, yet elegant dram that is a perfect showcase of what J.J. Corry does.

The complex profile starts with a delicate aroma that is floral with creamy biscuit notes, as well as stone fruit. There are apricot, lemon peel, toasted nuts, as well as creamy and malty notes on the palate. Finishes long with fruity and spicy notes lingering.