Learn more
Size750mL Proof92 (46% ABV) *Please note that the ABV of this bottle may vary
This unique whiskey won Best Irish Single Malt over 13 years old in the Irish Whiskey Awards 2018.
Notify me when this product is back in stock. 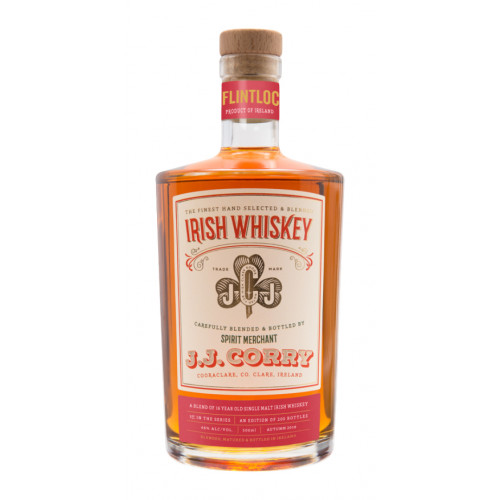 About J.J. Corry 'The Flintlock' Batch No. 1 Irish Whiskey

Founded in 2015 by Louise McGuane, J.J. Corry Irish Whiskey is known as Ireland’s first modern Whiskey Bonder. Irish Whiskey Bonding is a business where Bonders all across the Island would source casks and make new Whiskey Spirit to age and blend for local customers.

During the golden era of Irish Whiskey in the 19th century, most Irish whiskey was sold by these Bonders, a traditional practice that died out in the 1930s, due to the near collapse of the Irish whiskey industry. With this decline, Ireland lost hundreds of regional and local styles of whiskey, the art of blending losing its former glory. In honor of the brand of the renowned 19 century local Whiskey Bonder, J.J. Corry from Co. Clare, J.J. Corry Irish Whiskey has resurrected this lost art of Irish Whiskey Bonding.

The Irish company sources new make Whiskey Spirit from Irish distilleries before maturing it in a purpose-built bonded rackhouse located on the McGuane Family farm in Cooraclare, Co. Clare. They source and blend certain rare and mature whiskeys to create their unique house style, while they wait for their spirit to age.

Notes of sweet and light coconut ice cream on the nose with hints of lemon, followed by clover and honey. The palate is initially sweet, with peach on the mid-palate.