Size750mL Proof120 (60% ABV)
This cask strength straight bourbon is a very limited quantity, unfiltered, uncut, small batch whiskey, handpicked from thousands of barrels.
Notify me when this product is back in stock. 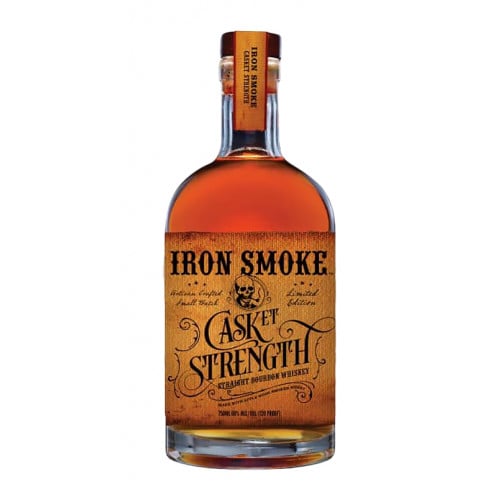 Tommy Brunett is a man of many talents — his band, The Tommy Brunett Band, tours frequently in the Upstate New York area and has gained national recognition for both original songs as well as classic covers of Johnny Cash and Billy Joe Shaver. A few years ago, while on tour, Brunett had an epiphany: "What goes together better than whisky and rock?" Being the consummate marketer that he is, Brunett teamed up with Master Distiller Drew Wescott to form Iron Smoke Distillery, which distills whiskey from fresh, local ingredients sourced directly from farms in the Finger Lakes region.

Made from a "bourbon" mash bill that contains corn, rye, wheat and smoked barley sourced from American farms, Iron Smoke Bourbon is distilled and aged by Tommy Brunett at his distillery in Fairport, NY. Before the grains are milled and mashed, Tommy and his team smoke them using applewood, which lends a pleasant, smoky yet sweet characteristic to the whiskey. Once distilled, the whiskey is aged in triple-charred, virgin American oak barrels before being brought to proof with water from the glacier-formed Finger Lakes.

Iron Smoke CASKet Strength Straight Bourbon Whiskey is a very limited quantity of Iron Smoke’s unfiltered, uncut, small batch bourbon. This rare and exceptionally complex 120 proof offering is handpicked from thousands of their very own triple char virgin white oak barrels. CASKet Strength has absolutely no liquid filler from any other source and delicious notes of butterscotch, vanilla and caramel.

Delicious notes of butterscotch, vanilla and caramel all throughout the nose and palate. The finish is smooth and succulent.

1.2 out of 5
(2 reviews)
Write a review
Real email address is required to social networks
Sign in
Login with Google
Login with Facebook
Or
We also recommend