Size750mL Proof116 (58% ABV)
South Pacific Distilleries' high-proof rum is getting harder and harder to find. This 17-year-old Fiji rum was distilled there in 2004. Bottled at 116 proof, only 4 barrels of this exceptional expression are available in the entire US. 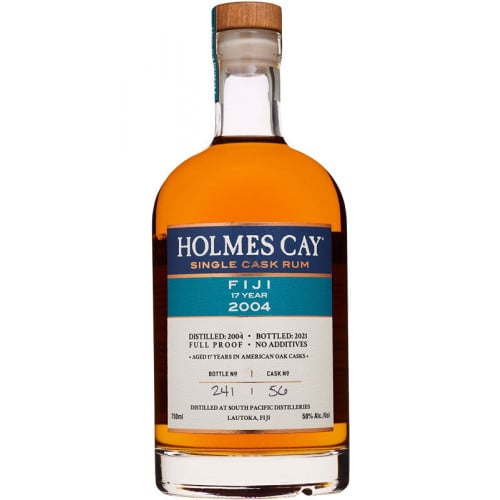 Holmes Cay Fiji 2004 is a single cask pot-distilled rum. Distilled in 2004 at the South Pacific Distilleries of Fiji, it's an exceptional molasses-based expression with a classic Fiji rum profile. Bottled at 116 proof, it's a rare 17-year-old rum with only 4 barrels available for the entire US. Last year's edition was loved by rum lovers and sold out quickly ― it's going to be no different with this one.

Grab your bottle of this exceptional Fiji rum today!

The nose has tropical fruit with banana and hints of grassy aromas, followed by prominent citrus, pepper, and caramel on the buttery palate. The finish is long and satisfying with spicy oak.