Size750mL Proof86 (43% ABV)
Rich, aromatic, flavorsome, and silky-smooth, this expression reaches into Diplomatico's rum reserves to find the most perfectly aged liquid. It was aged for 12 years in bourbon and malt whisky barrels, before being finished in Oloroso sherry casks. 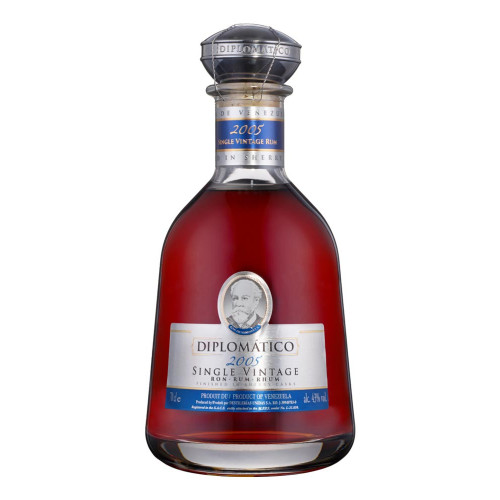 Named Diplomático in honor of the statesman who brought order and balance to a restless era in Venezuela during the 19th century, the 18th-century distiller Don Juancho Nieto Meléndez — also known as El Ambassador — these rums are the exquisite product of Venezuela's warm, tropical climate. The sunny days, cool nights, constant breeze, and abundant rainfall create an idyllic environment for growing and cultivating juicy, fresh sugarcane. The sugarcane is harvested, fermented, and distilled into rum, before being aged in a range of bourbon, port, and sherry casks. They are then masterfully blending by the hands of Tito Cordero, Diplomático’s maestro ronero.

The Diplomatico Single Vintage from their Prestige range reaches into their reserves to seek out the liquids that have aged the most gracefully. The 2005 Single Vintage has spent a dozen years in bourbon and malt whisky barrels. After those 12 years, the rum is transferred into Oloroso sherry casks for finishing. Rich, aromatic, flavorsome, and silky smooth, it has notes of vanilla, spices, and almonds on the nose with tobacco, oak, and caramel on the palate.

The nose of this exquisite rum opens with complex vanilla, spice, almond, and dried fruit notes, followed by a silky-smooth palate with tobacco, oak, caramel, dark chocolate, and a restrained sweetness. The finish is long with a dash of spice.