Learn more
Size750mL Proof128.6 (64.3% ABV) *Please note that the ABV of this bottle may vary
The very first release of independent bottler Holmes Cay, this rum perfectly embodies what founder Eric Kaye stands for. Vowing to bring rum's best-kept secrets to the US in their unadulterated form, this 128.6-proof Foursquare Distillery juice is limited to 504 bottles.
Notify me when this product is back in stock. 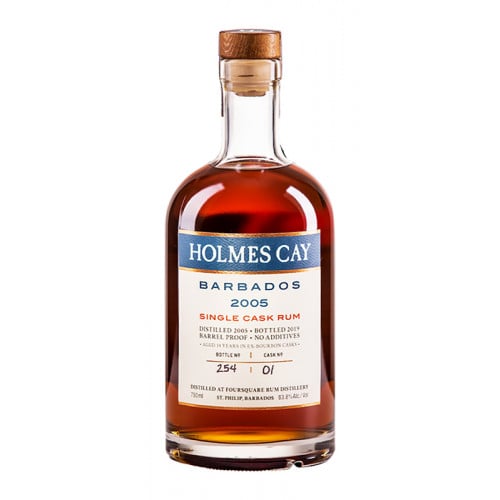 Passionately standing behind the tradition and honor that is an integral part of rum, Kaye hopes to bring incredible as-of-yet-unknown rums to the US, introducing spirit-lovers to the best-kept secrets of the rum world. How fitting that the very first release ― Holmes Cay Barbados 2005 ― comes from the legendary Foursquare Distillery in Barbados.

This British style rum was distilled in 2005 using a blend of copper pot and column still distillation, then aged in ex-bourbon casks for 11 years in the tropical climate of Barbados and another 3 in the UK. It's the embodiment of what Holmes Cay stands for and is bottled completely unadulterated at 128.6 proof. Only 504 bottles of this liquid gold were produced.

Pick up one of these limited-edition bottles today!

The complex and well-balanced nose has dark sugar, caramel, and a touch of peppery spice and oak. They are joined on the palate by cinnamon, vanilla, and toffee with a hint of orange zest. Finishes long and dry with a pleasant warmth.