This product is available in: CA, DC, NJ, NY Unfortunately, we can't ship to PO Boxes and APO addresses.

This product is available in: CA, DC, NJ, NY Unfortunately, we can't ship to PO Boxes and APO addresses. 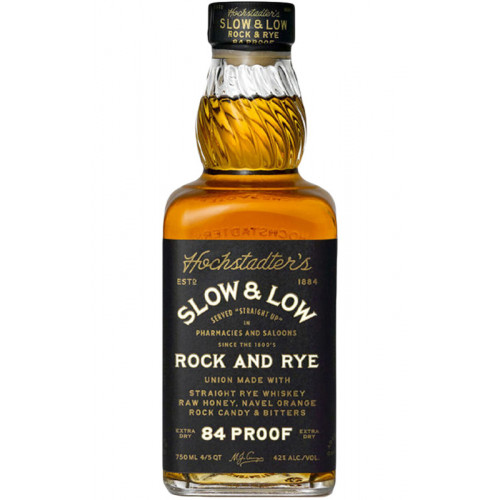 By the turn of the century, Rock & Rye blurred the line between refreshment and remedy. Pharmacists prescribed Rock & Rye to snuff out coughs, colds, sore throats, bronchitis, asthma and pneumonia." No ailment was too great or too small for Rock & Rye's therapeutic relief. In 1890, the Memphis Medicinal Monthly stated that when a man "gets within twenty yards of the door of the saloon he commences coughing, and he puts his hand over his chest with an agonized expression and slips in the door and takes some Rock and Rye."

Rock & Rye's reputation as a panacea continued well after Prohibition. At a 1952 conference for the Common Cold Foundation, Dr. Thomas Ward, a prominent Johns Hopkins virologist, was asked what medicine he preferred to use against rhinovirus. "Personally, my favorite treatment is old Maryland Rock & Rye," he replied. Nearly two decades earlier, Earl Hines and his orchestra recorded a dance chart entitled "Rock and Rye," which was penned by arranger Jimmy Mundy (who was later hired by Benny Goodman).

Hochstadter's Slow and Low Rock & Rye is made in Philadelphia "the birthplace of Rock & Rye" with a backbone of straight rye whiskey. The whiskey is macerated with orange peels before being infused with a picayune amount of honey. In addition, Cooper adds a hint of horehound — an herbaceous perennial plant often found in lozenges — to his elixir, before each bottle is filled by hand.

Hochstadter's has a mellow, slightly sweet flavor — the notes of spicy rye are nicely balanced with the sweet flavors of citrus, grapefruit and rock candy. Bottled at 84 proof, it has a smooth, long finish with hints of honey and orange.

Pick up a bottle of this Rock & Rye today!

4.8 out of 5
(5 reviews)
Write a review
Real email address is required to social networks
Sign in
Login with Google
Login with Facebook
Or
We also recommend