Size750mL Proof130.8 (65.4% ABV)
Distilled in 2008 and bottled in 2019, this single-cask whisky has spent more than 11 years in its first-fill American oak sherry puncheon. Hand-picked by Master Whisky Maker Gordon Motion and the founders of Scotch in the City, only 594 bottles are available. 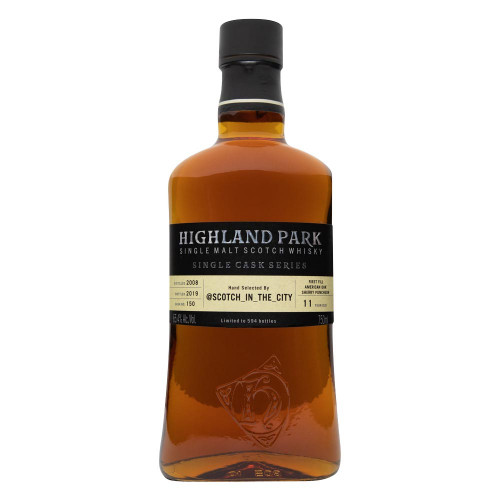 Situated in the Orkney archipelago in Northern Scotland, Highland Park Distillery was founded in 1798 by Magnus Eunson. Highland Park is an incredible longstanding whisky house, and they pride themselves on their rich Norse heritage, an essence that is reflected in their craft.

Today, over two centuries after its founding, Highland Park Distillery remains one of the few Scottish distilleries that continues to hand-turn, malt, and peat its own barley, using locally cut peat from the nearby Hobbister Moor. The malt is peated to 20 parts per million phenols, and then mixed with unpeated malt produced on the Scottish mainland.

The peat is "absolutely fundamental in understanding the flavor of Highland Park Whisky," says Russell Anderson, the distillery manager. Together with Orkney's unique environment (the temperate, moist climate of the archipelago results in an even maturation process), the peat gives Highland Park Whisky its traditional malty flavors that are tempered by an ever-so-subtle touch of smoke.

This expression from the Single Cask series is extremely limited, with only 594 bottles of Scotch in the City available. The whisky comes from cask no. 150 ― a first-fill American oak sherry puncheon ― where it has spent more than 11 years, maturing in Orkney's cool climate until perfection. The cask was selected by Master Whisky Maker Gordon Motion and the founders of Scotch in the City. Bottled at 130.8 proof and packaged in a premium bottle in a burlap sack, it's a fragrant, powerful, and masterfully-balanced spirit. Their similar single-cask releases have sold out rapidly in the past, making this highly-anticipated release a real treat that's bound to go fast.

Grab one of these 594 bottles today!

The nose opens with aromatic crème brûlée, honey, oak, dark sugar, and a touch of peat smoke. It's floral on the palate with rose, cedar, lemon zest, and peat notes. The satisfying finish has lingering wood spice notes.