FULL VOLUME is a limited edition 17 Year Old single malt Scotch inspired by the striking similarities between creating music and crafting whisky. Certified kosher.
Notify me when this product is back in stock. 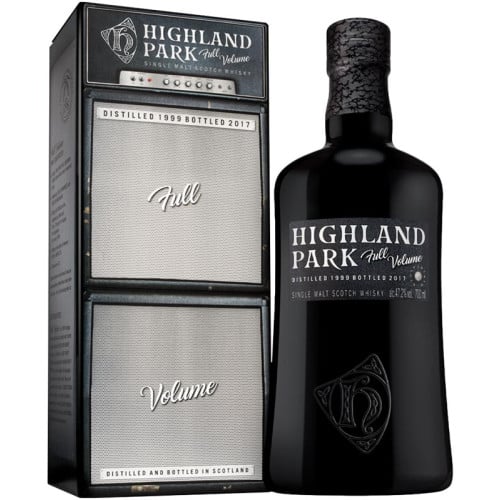 Highland Park Full Volume is a limited edition single malt. Distilled in 1999 and bottled in 2017, it is aged exclusively in American oak ex-bourbon casks as opposed to the traditional sherry casks. The inspiration behind this whisky is said to be the expertise of a music producer, highlighting the similarities to the skills of a whisky maker. Both are a masterful art, a pursuit of harmony. “For musicians, amps and equalizers maintain critical balance at high volume by fine-tuning musical frequencies – at Highland Park, our Master Whisky Maker, Gordon Motion, does a similar job” (producer).

The packaging for Full Volume is also inspired by old-fashioned guitar amplifiers, featuring dials on the sides that indicate the different measurements of the bourbon, peat, vanilla and fruit elements. Producer and songwriter Saul Davies created a special piece of music, in coordination with the launch. Full Volume features notes of creamy vanilla, tropical fruits, citrus and just a hint of smoke.