Size750mL Proof96 (48$ ABV)
Paying tribute to the rich history of this unique Mexican spirit, Guerra Seca is distilled from mature sotol plants. Ancestral processes are used in the production of this fresh, floral, smoky, and spicy expression that's bottled at 96 proof.
Notify me when this product is back in stock. 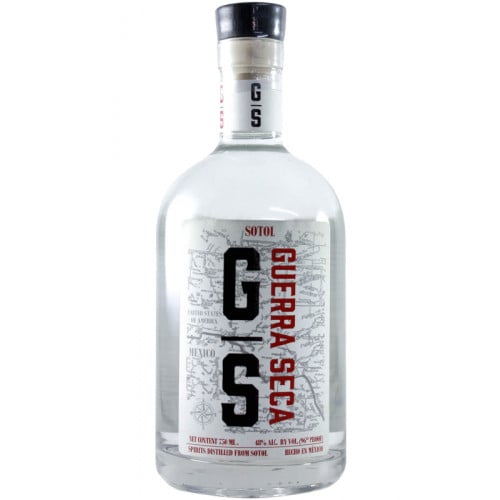 Originating in Mexico, sotol is a spirit that is distilled from the plant of the same name. In 1905, Chihuahua produced almost 500,000 liters of the spirit that has been made by the native Raramuris since 205 AD. First consumed in the form of a fermented beverage similar to beer, it was the Spaniards that began distilling the beer into spirit.

During the Mexican revolution, sotol was prohibited by famous revolutionary Pancho Villa, himself a teetotaler. Barrels were emptied on the streets, distilleries burned, the distillers killed, and production went underground. During Prohibition, sotol was smuggled into the US, supplying the speakeasies. After Prohibition ended, the demand for Mexican whiskey and sotol plummeted, prompting the Mexican authorities to ban sotol once again. Sotol was illegal up until 2002 in Mexico.

Guerra Seca Sotol is a tribute to the spirit's rich history and the ancestral processes involved in its production. The mature 15-year-old sotol (dasylirion levophyllum) plants are harvested with axes, cooked in underground volcanic stone ovens, fermented in wooden tubs, and distilled in a copper alembic still twice. Finally, the spirit is bottled at 96 proof and labeled by hand.

Get your bottle of this historic spirit today!

The nose is earthy and citrusy with floral and mineral aromas, almond, black pepper, tobacco, and cinnamon. On the palate, you'll find dusty and smoky notes, along with cinnamon, wood, and tobacco, culminating in a fresh, floral, and minty finish.