Learn more
Size300mL ProofVintage 1998: 86 proof *Please note that the ABV of this bottle may vary
This feature includes three unique expressions of Glenrothes Single Malt Scotch Whisky encased in a decorative gift pack.
Notify me when this product is back in stock. 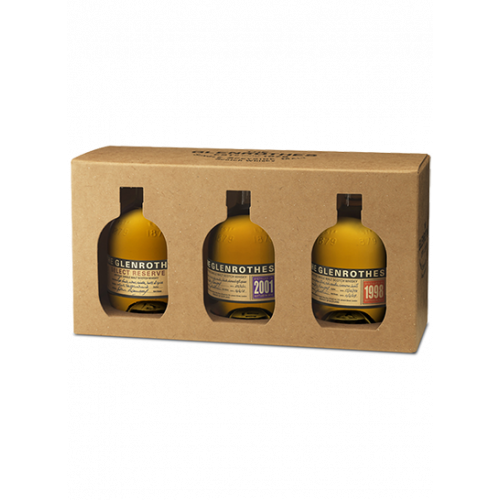 Situated adjacent to the Burn of Rothes in the Speyside region of Scotland, The Glenrothes Distillery was founded by in 1879 by James Stuart, who had previously been employed at The Macallan Distillery. The distillery's history is marred by tragedy — in 1897, construction workers who were attempting to expand the capacity of the distillery started a fire that consumed much of the distillery. Twenty-five years later, a fire at the distillery's original warehouse caused the loss of 200,000 gallons of maturing whisky. Despite having lost ten copper-pot stills in various accidents since its founding, the Glenrothes Distillery is now a picture tranquility.

Glenrothes Single Malt Scotch Whisky is made from plump, ripe Scottish barley that is malted and fermented using water sourced from the Ardcanny and Brauchhill springs, which are situated adjacent to the distillery. Following fermentation, the grains are twice distilled through the Glenrothes' copper-pot stills. The stills, which were designed and fashioned to be exact replicas of the original stills installed in 1879, are incredibly tall and uniquely shaped, which contributes to the overall light and sweet flavor of the whisky. After distillation, The Glenrothes' stillmen remove the heads and tails of the distillate and preserve only the "hearts"for maturation (the hearts comprise less than 20% of the entire distillate).

Unlike other Scottish distilleries that bottle their whiskies with an age statement, The Glenrothes Distillery bottles its whisky with a vintage statement. This method of bottling, which emphasizes maturity rather than age, allows each expression of Glenrothes Single Malt Whisky to have its own unique characteristics and personality without being encumbered by its ancestors.

The Glenrothes Vintage 1998 Single Malt Scotch Whisky was one of the first vintages of Glenrothes laid to rest, and was bottled in 2009. It has a medium golden appearance, along with an aroma of rich, spicy vanilla and maple syrup. It opens up to notes of soft citrus and hints of vanilla, which ultimately lead to a smooth, long finish.

The Glenrothes Vintage 2001 Single Malt Scotch Whisky is the newest expression of the Glenrothes Distillery. Bottled in 2012, this whisky was made from a blend of several different casks, and has an aroma of lemon meringue, cherries and cedar. Notes of vanilla and nutmeg predominate and lead to a sweet, oaky finish that ends with a drying touch.

The Glenrothes Select Reserve Single Malt Scotch Whisky is the first multi-vintage single malt whisky released from the Glenrothes Distillery. It was handcrafted by Glenrothes' malt master, John Sutherland, and has an aroma of oak, vanilla and stone fruits. The flavors are robust and malty, and include notes of orange zest, vanilla and cinnamon, which lead to a long and spicy finish.

This limited-edition triple pack of Glenrothes Single Malt Whisky comes in a unique gift pack, and makes the perfect Father's Day present. Pick one up today!

Select Reserve: Aroma of oak, vanilla and stone fruits. Flavors are robust and malty, and include notes of orange zest, vanilla and cinnamon, which lead to a long and spicy finish.