Be the first to review this product
The seventh annual release in Glenmorangie’s Private Edition range is finished in extra-toasted red-wine casks, and is designed to transport you to an old-fashioned sweet shop.
Add to Wish List
Notify me when this product is back in stock.

Glenmorangie Milsean Single Malt Whisky is the seventh annual release in Glenmorangie’s Private Edition range, which is designed to showcase the distillery’s renowned creativity and innovation. The whisky is crafted from Maris Otter barley, a type of winter barley that is bred specially to brew whisky and recognized for its ability to impart rich, rustic flavors. Once the barley was selected, it was mashed and fermented with water sourced from the Tarlogie Spring. The water produced from the spring, which spends nearly a century underground being filtered through layers of limestone before it is extracted, is unusually rich in minerals. In the 1980’s, when development in the area threatened the spring’s water quality, Glenmorangie purchased 600 acres of land around and including the spring, in order to ensure consistent water quality and adequate supply.

After the barley has been fermented, the wash is twice distilled through Glenmorangie’s copper-pot stills by a team of 16 distillers known as the Sixteen Men of Tain. Glenmorangie’s stills are equipped with relatively small boiler pots, which increases the exposure of the whisky to the copper, resulting in a more pure flavor. In addition, the stills are nearly seventeen feet tall — the tallest of any distillery in Scotland — and as a result, produce a lighter, more refined whisky.

Following distillation, Glenmorangie Milsean is aged in ex-bourbon casks before being finished in red-wine casks imported from Portugal, which have been toasted specifically for the purpose of aging Glenmorangie Milsean. This extra exposure to live flames causes the red-wine sugars to deepen in the wood, “allow[ing] us to create a whisky recalling a bygone era,” says Dr. Bill Lumsden, Glenmorangie’s director of distilling. “A glass of Milsean transports me straight to an old-fashioned sweet shop.” It has an aroma of green apple, fudge and cake icing which gives way to notes of toffee, sweet cherries, orange peel, coconut and ginger on the palate. The finish lingers, and has hints of brown sugar, cake mix and wood spice.

The whisky, previewed by Jim Murray for his 2016 edition of The Whisky Bible, received an outstanding score of 94 points.

Aroma of green apple, fudge and cake icing which gives way to notes of toffee, sweet cherries, orange peel, coconut and ginger on the palate. The finish lingers, and has hints of brown sugar, cake mix and wood spice. 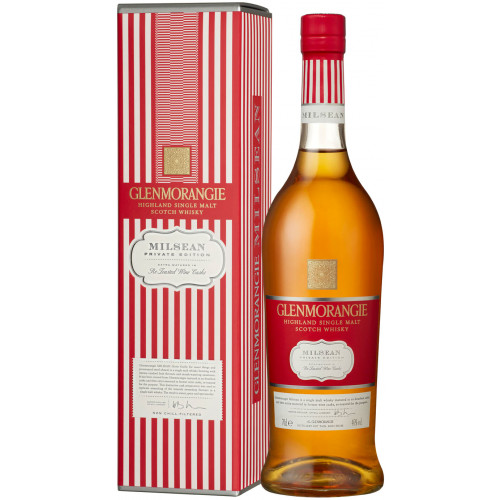