Learn more
Size750mL Proof92 (46% ABV) *Please note that the ABV of this bottle may vary
Crafted by Glenmorangie's Director of Whisky Creation Dr. Bill Lumsden, this whisky is finished in Tokaji dessert wine casks after its initial period of maturation in ex-bourbon casks.
Notify me when this product is back in stock.

This product is available in: DC, TX Unfortunately, we can't ship to PO Boxes and APO addresses. 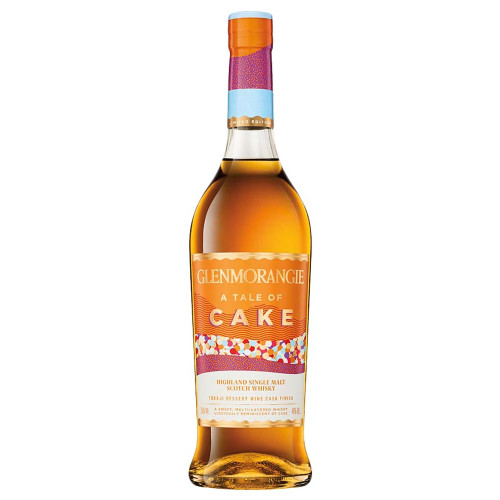 About Glenmorangie A Tale of Cake Single Malt Scotch Whisky

The inspiration for A Tale of Cake comes from Glenmorangie's Director of Whisky Creation, Dr. Bill Lumsden. He channeled the happy memories of his daughter's pineapple upside down cake as well as his grandmother's baking for this sweet expression. Lumsden decided on Tokaji dessert wine casks for the finishing step that follows initial aging in ex-bourbon casks. The result is a rich and complex limited-edition single malt that pairs surprisingly well with actual cake ― a fact that is reinforced by Dominique Ansel's creations. The famous pastry chef and inventor of the Cronut (a hybrid between a donut and croissant) has teamed up with Glenmorangie to create various CakeTails ― unique cake and cocktail pairings.

The nose is complex and rich with passion fruit, peach, pear, and mango, as well as baking bread, oak, and a touch of minerality. The signature Glenmorangie notes are there as well with honeycomb, vanilla, and almonds. The palate has plenty of sweetness with cake-like honey, white chocolate, vanilla, and pear, along with orange and menthol to balance it out. Finishes with lingering honey, chocolate, and nuts.