Size750mL Proof86 (43% ABV)
This 12-year-old Lowland whisky was double matured, spending its final 6 months in fortified wine casks. American oak casks were filled with Amontillado sherry for a month before being emptied and filled with the whisky. Bottled at 86 proof, it's a nutty, fruity, and pleasantly sweet whisky with a malty character.
Notify me when this product is back in stock. 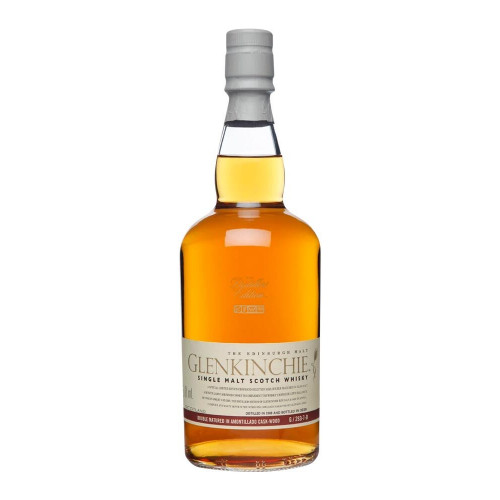 Founded by brothers John and George Rate in the 1820s, the Glenkinchie distillery sits in the valley of the Kinchie Burn, near the village of Pencaitland, East Lothian, some 15 miles from Edinburgh. The name is a reference to the name De Quincy, the original owners of the farmland where the distillery stands. Owned by Diageo, it's one of 6 Lowland distilleries. It produces one of the crucial components of Johnnie Walker whiskies.

The Glenkinchie distillery shut down in 1853, due to a dip in profits, and was subsequently turned into a sawmill. In 1890 the site was rebuilt and reopened by a collective of wine merchants and distillers also known as the Glen Kinchie Distillery Company. Glenkinchie was one of five distilleries that formed the famous Scottish Malt Distillers Ltd in 1914. Glenkinchie whiskies are produced using one giant wash still and one spirit still, churning out up to 1.3 million liters of whisky per year.

Glenkinchie 12 Year Old was named Best Lowland Single Malt of 2014 at the World Whiskies Awards. This expression from Diageo's Distillers Edition series takes that-much loved spirit for a second round of maturation in fortified wine casks. American oak casks were first filled with Amontillado sherry for a month, emptied, then filled with the whisky for up to 6 months, before being bottled at 86 proof.

The nose opens with hay, malted barley, and hints of nuttiness and grapes. There's a pleasant sweetness on the palate with biscuits, oak, and hints of pepper. The finish is peppery with a touch of toffee.