Learn more
Size750mL Proof86 (43% ABV) *Please note that the ABV of this bottle may vary
Aged for 21 years, this single malt scotch whisky is bottled behind a vintage The Glenlivet label that was last used by the distillery decades ago.
Notify me when this product is back in stock. 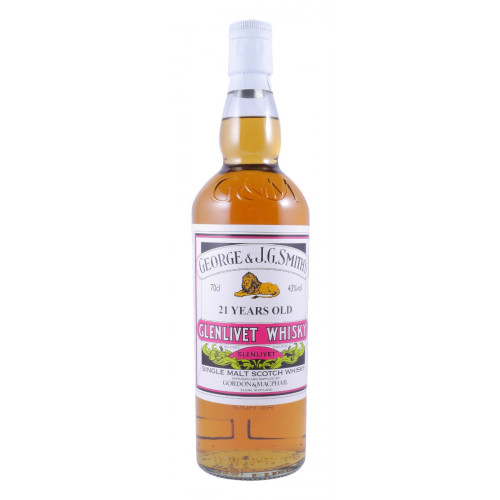 The Glenlivet Single Malt Scotch Whisky is made using barley sourced from Crisp Maltings, Portgordon (Portgordon is a village in Moray, Scotland). After the barley has been malted and mashed, it is fermented in wooden washbacks for approximately two days. The wooden washbacks used by Glenlivet are more difficult and expensive to maintain as compared to the stainless steel washbacks used by most Scottish distilleries, but impart a distinctive, floral quality to the whisky.


The Glenlivet 21 Year Old Single Malt Scotch Whisky is then matured for 21 years (it is legally old enough to drink itself) in Elgin, Scotland, in casks that were formerly used to mature bourbon and sherry. Once the whisky has matured, it is bottled behind a vintage Glenlivet label that was last used by the distillery decades ago.

The Glenlivet 21 Year Old has a floral aroma, with notes of dry grass and cedar. The flavor is soft, with gentle notes of mustard seeds, rich fruits, and spicy wood that ultimately lead to a luxurious, oily finish that has a touch of fruits.

Floral aroma, with notes of dry grass and cedar. Soft flavor profile, with gentle notes of mustard seeds, rich fruits, and spicy wood that ultimately lead to a luxurious, oily finish that has a touch of fruits.