Size750mL Proof92 (46% ABV)
This GlenDronach 15-year-old is complex and satisfying with notes of Oloroso Sherry and spice. 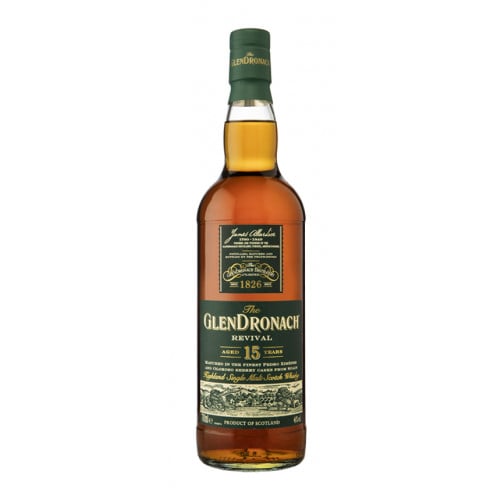 The year is 1826, the Temperance Society had just been formed in Boston, Beethoven’s Quartet No. 13 is premiered in Vienna, the combustible engine is being patented, and deep within the Scottish Highlands, in the land of peat and bagpipes, the GlenDronach distillery is being born. GlenDronach got its start shortly after the Excise Act of 1823 when James Allardice became the second person to apply for a license to distill Whisky in Scotland. Ever since, the iconic Scottish distillery has been under the ownership of several well-known names in Scotch, namely; Walter Scott, Captain Charles Grant, and William Teacher and Sons.

“GlenDronach 15-year-old Revival went on hiatus three years ago due to a shortage. In 2018 it re-emerged with a new recipe, tweaked by master distiller Rachel Barrie. As before, a mixture of Pedro Ximénez and oloroso sherry casks has taken care of the aging process, and the result is one of the very best sherried single malts of its age on the market. The distillery’s characteristic spice, fruit, and chocolate notes are here in abundance, merging seamlessly and with satisfying complexity to create a great after-dinner dram” (Gavin D Smith, Whisky Advocate).