Size750mL Proof103.2 (51.6% ABV)
This limited edition bottle from Laphroaig is the first madeira-finished expression from the esteemed distillery, a unique release that Islay fans can’t miss!
Notify me when this product is back in stock. 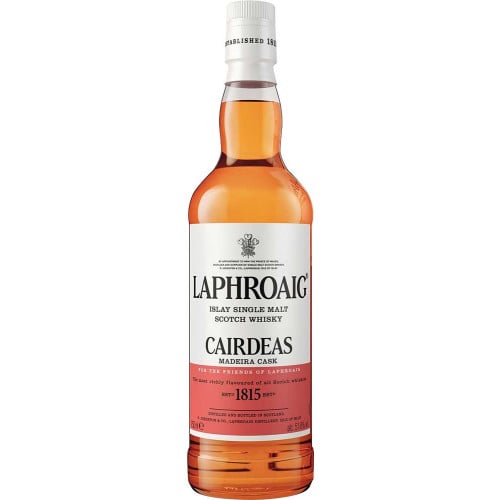 Situated on the southern coast of Islay, Laphroaig (pronounced La-froyg) Distillery was founded nearly two centuries ago by Donald and Alexander Johnston. The distillery derives its name from the ancient Gaelic word "lag"(meaning hollow) and the ancient Norse word "vik" (meaning bay), which refers to its location on the shores of Loch Laphroaig.

Laphroaig is known for producing some of the most flavorful and intense whiskies made anywhere in the world. During Prohibition, their single malt was one of the few whiskies still legally imported into the United States, as it was considered a medicinal spirit. Laphroaig Cairdeas is made from the finest Scottish barley, which is then malted at the distillery and smoked over a peat flame. Unlike other distilleries which source peat from the Scottish mainland, the peat used to smoke Laphroaig barley is made of from the heather, mosses and lichens of Islay and adds a distinct iodine-like flavor to the whisky.

Each year for Feis Ile (the Islay festival of music and malt) Laphroaig Master Distiller John Campbell crafts a limited edition malt in celebration of friendship, “Cairdeas” in Gaelic, to celebrate the occasion. This year’s expression features fully-matured Laphroaig aged in ex-bourbon casks before being finished in hogshead casks seasoned with madeira. The madeira adds an element of sweetness to counterbalance this smokey giant, resulting in a bold and multifaceted whiskey that Laphroaig fans don’t want to miss!

Laphroaig Cairdeas 2016 Madeira Cask features the signature Laphroaig aroma of smoked peat mediated by citrus, sweet licorice, pepper and nuts. The palate emerges with notes of citrus and sweet licorice, followed by hints of pepper and nuts. The palate arcs from earthy notes to dry saltiness before yielding to creamy orange flavors, followed by a dry and spicy finish.

Pick up a bottle of this limited edition bottle today!