Size750mL Proof80 (40% ABV)
Are you a traditional Glen Moray fan or are you just looking for something fresh and new? This offering is for you, then. A sweet and full-bodied Whisky, it brings a very unique flavor profile that comes from a finish in Cabernet Sauvignon red Wine casks. 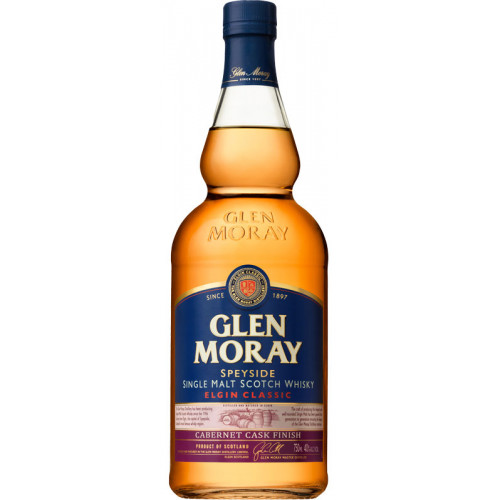 Glen Moray Cabernet Cask Finish Scotch Whisky is one of those offerings that will be appreciated by both the traditional Glen Moray fans as well as for those looking for something fresh and new. A sweet and full-bodied Whisky, it offers a very unique flavor profile that comes from a finish in Cabernet Sauvignon red Wine casks. Born out of the Glen Moray’s love for experimentation with different styles of casks, it was first aged in American oak before it was finished in French red Wine casks. Expect a dram rich with dark chocolate and intense spice that come together in a rare and beautifully rounded Whisky. Savor neat, on the rocks, or with a couple drops of water.