Size750mL Proof86 (43% ABV)
This elegant rare edition vintage was distilled in 1987 and matured in some of the finest Port casks sourced from Portugal.
Notify me when this product is back in stock. 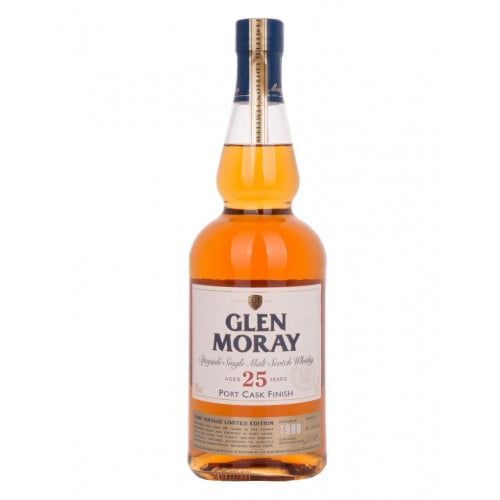 Glen Moray single malts are produced entirely onsite, in pot stills, from the distillery’s own water and malted barley. A tradition that dates back to 1897. The whiskies mature in American oak casks sourced from North America. The result is a signature single malt with every bit of Speyside character: soft and fruit-laden. This elegant 25-year-old single malt is an extremely rare limited edition vintage, with each bottle individually numbered. Finished in the finest, authentic Port Casks imported from the best port Houses in Portugal, this is a rich and complex whisky with a depth of delicate aromas.

Sweet candied aromas on the nose with notes of tropical fruits, barley sugars and nougat with seasoned oak in the background, followed by decadent fudge and caramel. The palate is smooth with notes of sweet vanilla, salted caramel and subtle oak. Tawny Port pipes add a depth of character with complex notes of fruit and warm spice. The finish lingers elegantly with a smooth, fading sweetness, layers of spiced oak and toasted brown sugar.